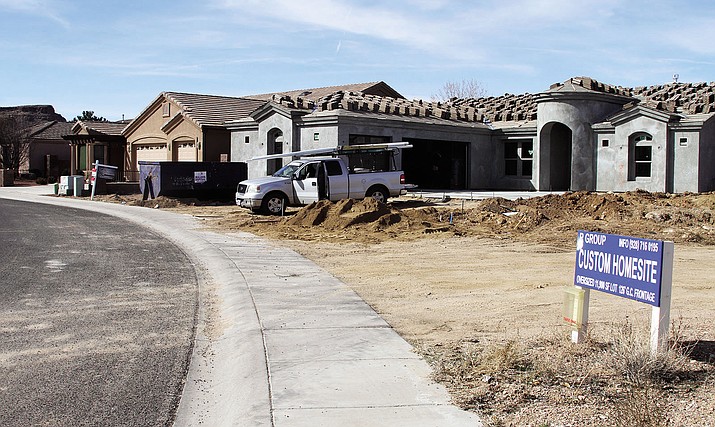 A home under construction at Country Club Drive.

This home is under construction on Whitehead Street. The Kingman area is lagging behind other parts of the nation when it comes to the housing market.

KINGMAN – Long’s Construction built about 15 new homes last year and is off to a good start with four homes about to be completed in the next couple of weeks, one custom home and three “spec” homes, or homes built on speculation of sale.

The local housing market has been a little dicey following the Great Recession, but it’s making steady progress, said Jo Long, co-owner of the private home builder with her husband, George.

The area continues to lag behind increasing national trends.

Nationally, sales of newly built, single-family homes rose 12.2 percent in 2016 to 563,000 units, the highest level since 2007, according to data released in January by the U.S. Department of Housing and Urban Development.

“We are encouraged by the growth in the housing sector last year, and by the fact that builders increased inventory by 10 percent in anticipation of further business,” Robert Dietz, chief economist of the National Association of Home Builders, said in a statement.

Housing markets are different in each region of the nation, and Kingman has been slow to catch up with the national numbers. The West overall was down 1.3 percent in 2016 new home sales.

“I think it’s picked up a little bit, but not much,” said Ron Jewett, owner of Jewett Construction in Lake Havasu City.

He has five homes under construction in the Kino Ranch subdivision in Kingman, a development that was stalled by the Great Recession.

Jewett built just five homes in 2016, including a custom home in Lake Havasu City, and expects to double his production this year.

Prior to 2008, permits for residential building in outlying rural areas of the county were issued through a zoning permit process rather than a building permit process, explained Christine Ballard, Planning and Zoning division manager.

The county issued 1,818 residential permits in 2008 and 1,477 in 2009, but those numbers do not separate new homes from new garages and new patios, Ballard noted.

Builders are being squeezed on prices as the market remains competitive moving forward. They’re also up against rising mortgage rates.

Jewett said the last three or four houses he sold were to people moving from more expensive areas. One couple came from Lake Havasu, and another from Riverside, California.

Long Construction is selling four popular floor plans with the sweet spot being a 1,750-square-foot home priced at $219,900. The builder has homes under construction all around Kingman, from rural areas on north Stockton Hill Road and Blake Ranch Road to upscale subdivisions on Hualapai Mountain Road.

“They sell before we complete them in most cases,” Jo Long said. “We’re seeing young retirees from California and a few transfers from the Northeast where there’s snow.”

Some buyers are coming from congested areas such as Los Angeles and Riverside County, and it’s about a 60-40 split between living in the city of Kingman and looking at more rural areas, she said. Hualapai Shadows and Boulder Creek are “hot areas” for new homes, she added.

Doug Angle, founder of Kingman’s top home builder, Angle Homes, was doing about 80 homes a year during the boom and saw the number drop to a low of 26 closings in 2012. It was “nip-and-tuck for a while,” he said.

Jewett said remodeling and commercial work has picked up, and that’s reflected in permit reports from the city of Kingman.

Many remodelers are seeing consumers commit to larger, long-term home improvement projects, with the NAHB Remodeling Market Index posting a reading of 53 in the fourth quarter.

The index is on par with levels from the first half of 2016.

New home construction in Kingman trending up
Values rise, construction crews active as one segment of economy heats up
Housing up, but it's not another boom
Growth keeps builders, inspectors busy in 2005
Housing construction permits down, but home sales steady in Kingman<BR>