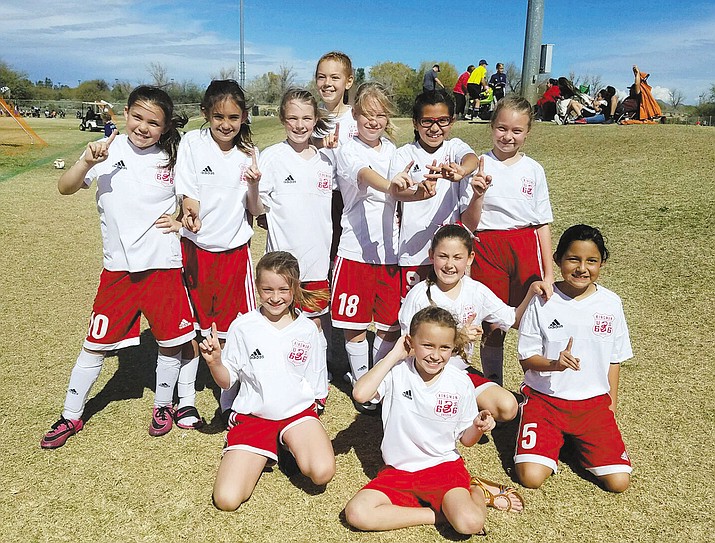 The Kingman 11-and-under girls team, ranked 40th in Arizona, won the Desert Classic going a perfect 4-0 in Phoenix on Saturday and Sunday.

Kingman Youth Soccer League competitive clubs took three teams to the Desert Classic in Phoenix Saturday and Sunday. The tournament boasted of over 400 teams in various age groups from all over the western United States. The Arizona 40th-ranked Kingman 11-and-under girls team made the long drive back to Kingman with smiles on their faces, as they came home with a first-place finish.

Gabe Otero, president of the Kingman Youth Soccer League, said that sending teams to these tournaments in the Phoenix area is so important to our players progressing in their soccer abilities. They get to play in the best field conditions in the state and against some of the best teams in the United States. In Kingman it can be a struggle to find well-maintained areas to play on because Kingman does not have dedicated soccer fields like Little League and softball organizations do.

“The Desert Classic was so large that the three Kingman teams competing played in three different parks throughout Phoenix,” Otero said.

The girls 11U team played their games at the Red Mountain Soccer Complex, which features six professionally-groomed soccer fields that spanned almost 22 acres.

Kingman went into the weekend 4-2-1. They added to their win column by winning every game, scoring an average of 4.5 goals per game. Kingman’s defense was almost impenetrable and was led by goalie Cielo Lobato.

Coach Kimbra Bratley said “Cielo is a wall and I am constantly getting compliments from teams we face about her abilities in the goal. We are very fortunate to have her on this team.”

Kingman’s first match was an afternoon game against Phoenix Rush, ranked 39th in Arizona. Earlier in the day, Rush beat the Colorado Storm 2-0. Storm was ranked 81st in the state of Colorado.

“We thought that going into this game it would be our toughest fight because we were ranked 40th and Rush was ranked 39th in the state,” said coach Bratley. “I was also concerned, because in the past we have come out slow in our first games and the Rush team was already in the groove with their first victory earlier in the day.”

Kingman scored first and gave the girls a short lived boost because Rush came right back and tied it up. In the end it was Kingman’s aggressive play that wore the Rush team down.

“Going into the second half we started stacking up the points and with every point we scored the Rush team became more frustrated and our girls became more confident,” Bratley said.

The next game was played under the lights against the 61st-ranked Scottsdale Soccer Blackhawks. Bratley said that “We won but we missed many opportunities to score. In the future we will need to capitalize on those opportunities because missing an easy goal will be the difference between a win and a loss.”

“Overall I am very happy with the results,” said Bratley. “We have wonderful, supportive parents that put in a lot of time and money to make it possible for these girls to accomplish what they did this weekend.

“I am very proud to be part of this soccer community.”

The Kingman Boys 14U and 12U teams will attend the Colorado River Open Invitational in Bullhead City this Friday and Saturday.

The girls teams will see action again on Feb. 25-26 at the Blackhawks Invitational in Scottsdale.