Tigers looking to shock the world against No. 1 Pima today 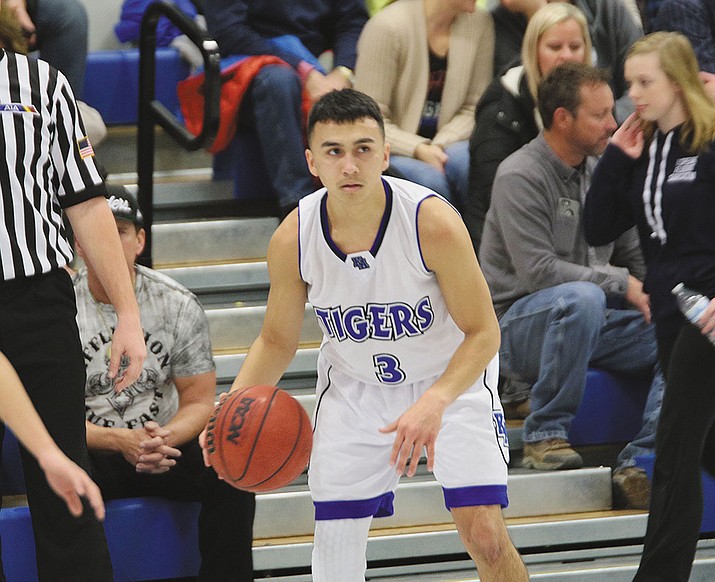 David Larrabee and the Kingman Academy Tigers face No. 1-seeded Pima in the first round of the 2A Conference State Basketball Tournament at 4:30 p.m. today at Yavapai Community College in Prescott.

KINGMAN – On Friday at 4:30 p.m. at Yavapai Community College after a two-week layoff, the last of the remaining local teams, Kingman Academy, attempts to upset the No.1 ranked team in 2A basketball, Pima. It will be a tall order and a true David vs. Goliath matchup as the Roughriders (25-2, 12-0) are undefeated in 2A East play and on a 15- game winning streak.

Pima coach Cliff Thompson has a lot of talent back from last year’s (28-5, 11-2) team that went deep into the playoffs before losing to Yuma Catholic in a 2016 AIA Boys Basketball State Championship semifinal game, 48-43.

The lead dog for Pima is 6-foot-6 forward Jarret Kartchner, who has been nearly unstoppable when he gets the ball down low. He is the team’s leading scorer. Justin Kartchner, at center, and guard, Alex Pruszynski, are their two best passers. Sophomore Dawson Pruszynski will start at forward and Trey Thompson is a 6-foot guard and will run the point.

This is a game where Pima wants to get out and run up and down the floor and turn the basketball game into a track meet. What helps the Roughriders is they are athletic, long, and get a lot of runouts.

“The biggest challenge we face in this game is not having played a game in 15 days,” Thompson said. “I think we are sick of facing each other every day in practice and look forward to playing someone else. We are a fairly balanced team with size.”

If the Tigers come out with little intensity, as they displayed at Parker, and throw lazy passes on the offensive end of the floor, and don’t take care of the basketball and turn it over, it will be a long night.

On defense, they must slow the Roughriders offense down by pressing, trapping and overplaying the passing lanes to force turnovers. They cannot play matador defense or this game will be a blowout.

Pima is not a team that will allow Kingman Academy to fall behind and come back. If the Tigers rush shots and take bad 3-point shots, do not hit the boards, or get back on defense, the Tigers will be coming back to Kingman with a 25-point blowout loss.

Kingman Academy will win if they play as a team. The Tigers will need five players to step up on both ends of the floor. David Larrabee must take care of the ball on the offensive end of the floor. He has to get others involved as well as get his points. He must make enough 3s to create driving lanes to free up shots for others. If it is the Big 2 or 3, coffin time. For this team to win the scoring sheet should look like this: Larrabee 26 points, Cade Martin 22, Tyler Chinyere 16, and they get production on both ends of the floor from somebody unexpected.

Martin must hit his jumpers and get out on the break and finish. Chinyere must play big against Kartchner and stay out of foul trouble. Larrabee has to take the open three when it is there, but he has to drive the lane and create easy shots for his teammates. Coach Brian Devincezi has to switch up defenses to make it hard for Pima’s offense, just to give them different looks and slow them down.

Devincezi has to have his boys ready to play as soon as they get to the gym. He has to get them to believe they can win once the Roughriders step onto the floor. If the Tigers can win the mind and size battle and stay within a field goal late into the fourth quarter, they have a chance.

Finally, the Tigers should realize they had a great second half of the season since David Larrabee became eligible, but they are not playing MALC. This is a state tournament game: survive and advance.