The politics of pain - another side of the opioid story 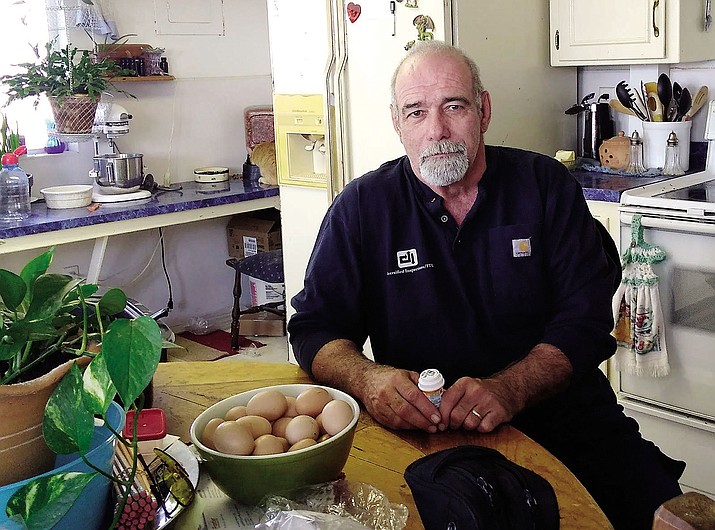 Dolan Springs resident Jay Fleming has safely taken opioids to tamp down chronic pain he has suffered for 20 years. Public policy is in chaos today due to thousands upon thousands of overdose deaths in recent years, which has resulted in the health care of people like Fleming to be compromised.

Most people who take prescription pain medication do so responsibly – and live a better quality of life in the process. But a national epidemic of fatal opioid overdoses has made getting these drugs increasingly difficult for the very people they are supposed to help.

They’re making it tough on people like Jay Fleming, a legitimate prescription opioid user who can’t make it through the day without his drugs.

He feels shots of pain fire down his right leg like electrical shocks, and his calf muscle is gone, the aftereffects of the back surgery he had 20 years ago that screwed up his nerves.

Fleming, of Dolan Springs, has been taking morphine for his pain, and now his doctor is switching over to a different drug, hydromorphone, sold under the brand name Dilaudid, among others, because of federal cutbacks in opioid medications.

“I have been a good patient for many years,” Fleming said. “I have never abused my medications. It’s sad when patients abuse their medications. It’s tragic when a patient takes their life because of lack of pain relief.”

Indeed, there are many dangers of opioid use, as the Centers for Disease Control has been pounding in recent campaigns, but a majority of long-term users find opioids essential for reducing their pain.

Now they’re having trouble getting their medications, in large part due to abusers who are driving the spike in opioid overdoses that have been pegged as a national health issue.

Mohave County saw a dramatic increase in suicides after Dr. Albert Yeh surrendered his medical license in 2011 for prescribing controlled substances for other than legitimate medical needs. Yeh operated a pain management clinic in Golden Valley from 2006 to 2009.

“There was a big spike in suicides after Dr. Yeh,” Fleming said. “Because of what they’re doing now, you watch, suicide rates will go up next year.”

Abuse and addiction to opioids such as heroin, morphine and prescription pain relievers are a serious problem that affects the social and economic welfare of all societies.

Drug overdose is the leading cause of accidental deaths in the United States, with tens of thousands lethal drug overdoses in 2015, according to the American Society of Addiction Medicine.

Consequences have been devastating and are on the rise.

It’s estimated that 2.1 million people in the United States suffer from substance abuse disorders related to prescription opioid pain relievers, and there’s growing evidence of a relationship between increased use of non-medical opioid analgesics and heroin abuse.

Too Many People Are Dying

“The problem is there are a very high number of overdoses and death,” he said. “In response to that, there is a movement by regulatory agencies to rein this in. People like Jay, they’ve been on medications for a long time and, right or wrong, their body has adjusted. So it’s difficult to lower the level of medication.”

Venger said many patients are responsible users. Obviously, if you’re suffering from terminal illness, you need the medication, he said.

One step to mitigating opioid abuse is to develop better communication and more cooperation between hospitals and providers, he said. Rarely is he told when one of his patients is treated at an emergency room for overdose symptoms.

“There has to be notification so we can effectively treat people who are having problems. Not just opioids. The common drug here is methamphetamine and the increase in heroin. That’s another problem. It’s very difficult.”

Venger said he monitors patients carefully and nurtures a dialogue with them based on trust and respect. A lot of them will admit they screwed up, abused the system and hit the streets to buy heroin.

“There’s no easy answer,” Venger said. “I feel bad for people who started their medication at a different time and now the rules are changing.”

Fleming said one of his doctors told him at his last appointment that the Drug Enforcement Agency had mandated a reduction of dosage to 100 milligrams of morphine or the equivalent.

“The DEA sets quotes, but they don’t tell doctors what to do and how much to prescribe,” Fleming said.

It was actually the Centers for Disease Control that provided a guideline for primary care physicians who prescribe opioids for chronic pain outside of cancer treatment and palliative care.

“I have been on the dose for many years and cutting my dose by more than half was cruel and unjust and caused problems,” Fleming said. “A couple years ago, when prescriptions were hard to fill, I went through withdrawals. I had sweats and chills, violent vomiting, and my heart would have palpitations and skipped beats.”

Fleming said men taking opioids should have their testosterone levels checked. It can cause problems with their relationships.

“If you stop making love to your wife, she’ll think you’re either cheating on her or you don’t love her,” Fleming said. “Neither is good for a relationship.”