Fresh off success of ‘The Scrooge,’ Beale Street Theater ramps up for 2017 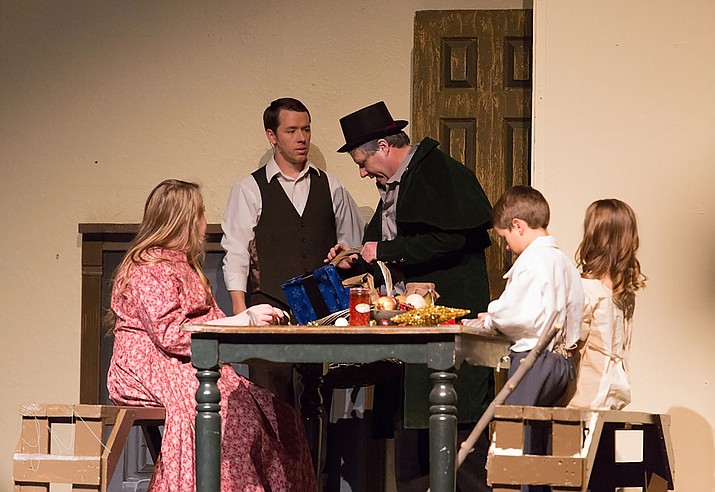 The entire cast of Beale Street Theater’s production of “The Scrooge,” which was a big success in December. More productions are in the planning stages.

“People didn’t understand the premise,” she said. “It was supposed to be more of a variety and talent show. We will put something together with Lee Williams at some point.”

The nonprofit Kingman Center for the Arts, which was formed last year to refurbish the Beale Street Theater in downtown Kingman, is now working on a murder mystery dinner show that will be presented as a fundraiser at the historic Elks Lodge in March.

Beale Street Theater has put on a few successful events, including the production of “Scrooge” at Kingman High School that brought in more than $6,000 in ticket sales, Michelson said.

“We realized we can bring in an audience with ‘Scrooge.’ We’ll have four more productions over this year and some other things as well,” she said. “We’re in the works for a bigger production with Kingman High School in June. Those facilities … we do pay for custodial, so it can add up. We want to make sure when we use that facility that we can support the cost.”

More than 250 people attended each night of the children’s theater production of “The Nutcracker” at Lee Williams High School in December, and “Zombie Fest” had a good showing at Metcalfe Park in October.

Sara and Nate Peterson, who founded Kingman Center for the Arts, closed escrow in December on buildings at 202-208 E. Beale St. They’re going to be used for art, music and drama classes.

“We’re hashing out all the details, but it will be a function of the nonprofit,” Sara Peterson said. “It’s possible we may have retail to go along with everything else. There’s no music store, no place for kids to rent instruments. So we’ll have an art component, a music store component and a gallery component.”