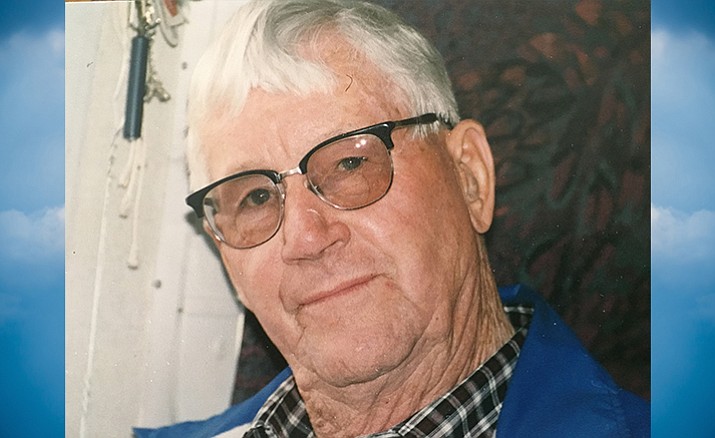 Frederick Alan “Swede” Beeman, of Kingman, Arizona died peacefully on Jan. 8, 2017 in the home of his daughter, Susan, surrounded by his daughters, Linda, Susan and son-in-law Ed Shimp.

He married Bette (Percy) Beeman on June 9, 1947 in Winner, South Dakota. They moved to Rapid City, South Dakota, where Fred enrolled in the School of Mines. He graduated with a B.S. in Geological Engineering in 1950.

Bette and Fred moved to Belle Fourche, South Dakota in 1954, had two daughters and became involved in the community and church they loved.

Fred was a very friendly person who never stood next to anyone that he didn’t converse with. When his wife sent him to the store she never knew when he would return, it was completely dependent on who he met along the way and how long their conversation lasted.

He belonged to several organizations over the years: Jaycee’s, Toastmasters, Lion’s Club, Shriner’s, Elks, Mason’s, Republican Men’s Group and many others. The memberships in these organizations was important in the fact that they tell you what kind of man our father was.

He was a family man who took great pride in everything he did. He had a strong work ethic and a desire to help people in his community.

Fred brought Bette with him on several business trips he made to Kingman while working for IMC. They fell in love with the area and moved to Kingman in 1974, where they quickly became involved in their church, Grace Lutheran, and the community. They lived there for the rest of their lives except for a short stint in Battle Mountain, Nevada.

He was preceded in death by his wife, Bette; his parents, one brother, one sister and many relatives.

There will be no memorial services. Donations may be made to the Humane Society, Grace Lutheran Church Youth Group, or the charity of your choice.

Lending a hand or saying a kind word to your fellow man was the embodiment of our father, so please take a moment out of your day and pass his love along.