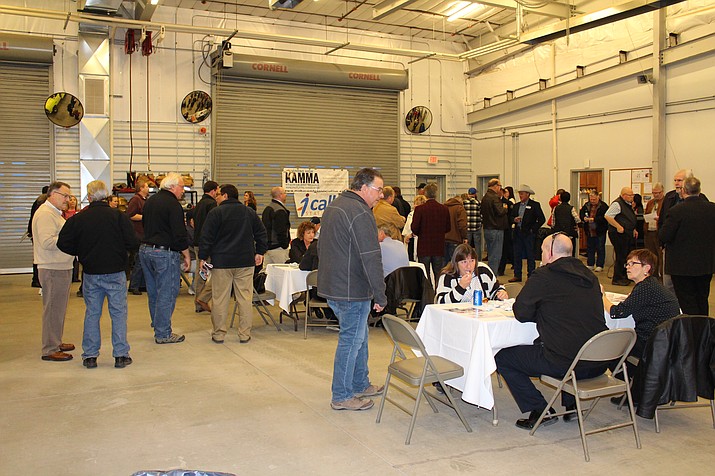 KINGMAN – The more people know about Kingman and Mohave Manufacturing Association, the more likely it is to succeed, said John Hanson, chief operating officer of Laron and chairman of KAMMA.

That’s why he was pleased to see a great turnout of about 75 people at the third annual KAMMA mixer held Thursday in conjunction with the Kingman Area Chamber of Commerce.

If KAMMA succeeds, everybody succeeds as a result, Hanson said.

“KAMMA is driving the tide, trying to get the tide to flood, to raise all boats,” Hanson told those attending the mixer at Kingman Airport Authority. “The only people who can’t ride that tide must have holes in their boat, or mud in their boots.”

The nonprofit group was formed five years ago to serve the manufacturing industry by providing a forum to look at problems, ideas, needs and solutions for the community.

Membership has increased to about 45 companies and organizations, each paying a $200 annual membership fee.

Hanson singled out Kingman Vice Mayor Jen Miles during his half-hour talk, crediting her with providing a $5,000 grant from the city for KAMMA to incorporate under IRS 501(c)6 status, which is nonprofit, but allows the organization to endorse political candidates.

KAMMA was able to pay back the full amount of the grant, one of the few times the city has ever received a check after giving money to someone, Hanson said.

KAMMA is growing its membership and developed a web site last year to advertise what can be done at Kingman Airport and Industrial Park and throughout Mohave County.

KAMMA did an assessment of training needs and worked with Mohave Community College to set up a mobile training center that can train operators and mechanics on how to do a specific job, he said.

Miles said she’s been fortunate to work with KAMMA since its inception, and called it a “wonderful organization” for the community.

It’s run by people who care about the manufacturing employment base and want to make Kingman a hub for industry and transportation, she said.

Hanson is the “visionary” who made the organization what it is today, Miles added.

“Step by step, day by day, year by year,” she said. “It’s his investment of hard work and everything he brings to the table that makes this organization successful.”