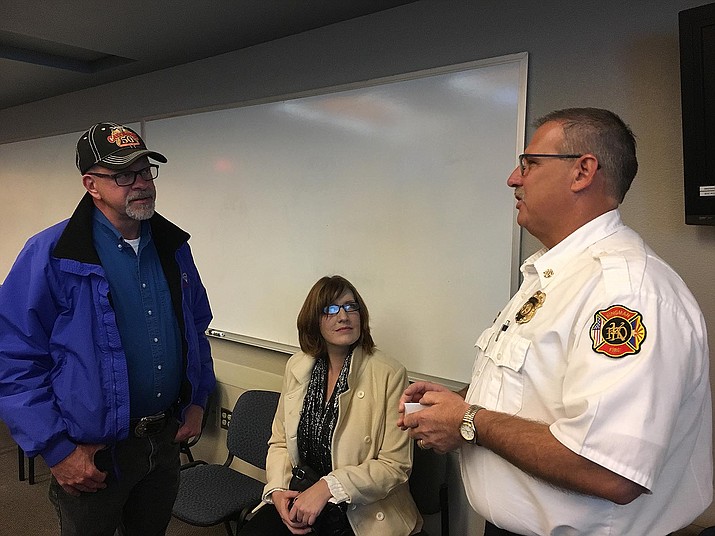 They’re hoping to alleviate the “disconnect” between building officials and contractors when they’re dealing with renovation of 100-year-old buildings in downtown Kingman that are out of compliance with the International Building Code.

Keith Eaton, deputy fire chief for Kingman Fire Department, will now oversee the building department and become the boss of Jim McErlean, whom many contractors said was difficult to work with. McErlean did not attend the meeting.

Four building inspectors and a permit technician will be moving their offices from City Hall to the fire department’s administration building at 412 E. Oak St.

“I’ll be involved in the day-to-day building permits,” Eaton told a dozen builders attending the meeting at Kingman Police Department. “The big thing for us is preconstruction meetings, presubmittal meetings. That’s a big deal.”

It’s not always about the building code, but interpretation of the code, said Eaton, who was a commercial developer in 30 states.

By fixing the existing code, issues from the past will be addressed, he said. Some parts of the building code, specifically those written for the American with Disabilities Act, are an entirely different animal, though there are still gray areas, Eaton added.

Richard Hamilton, owner of H&H Develoment, said he’s heard a lot about the “one-stop shop,” and that’s good, but he has his doubts about whether it will be successful.

problems,” Hamilton said. “It was an attitude of black and white, no gray. Why does it have to be that way?”

“That sort of selective enforcement won’t happen,” Rhoades said. “I can assure you those personal issues will be alleviated.”

Local home builder Doug Angle of Angle Homes said he has a “huge problem” with planning and zoning.

“I have four subdivisions and it’s a battle every day with engineering,” Angle said. “I spend a lot of time with them. We’re going backwards if we put planning and zoning under engineering. It’s a struggle now.”

City Manager John Dougherty said he would keep that in mind, and that things could change in the organizational chart.

“Nothing is set in stone,” he said.

Kingman Mayor Monica Gates asked the builders to have an open mind for the next 60 days while the one-stop permitting process is tweaked, and another meeting will be scheduled to get their input.