Flying Fortress will land in Kingman in February 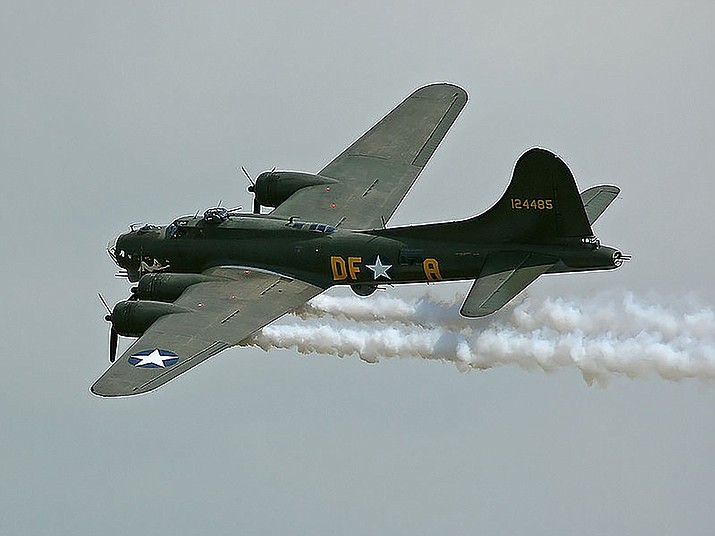 KINGMAN – Duck for cover. The B-17 “Flying Fortress” bomber will be flying over Kingman in February.

The historic plane that played a critical role in the Allied Force’s victory in World War II will be on display Feb. 17-19 at Kingman Airport, with public ground tours offered and flights available. More on this later. Thousands of gunners and crew members for the B-17 were trained at Kingman Air Field, giving the visit extra historical significance for the area.

The B-17 tour was arranged by Tim Gerlach, president of Experimental Aircraft Association Chapter 765. The plane, owned by Oshkosh, Wisconsin-based EAA, is on a national tour that includes a stop in Arizona.

Kingman Airport Authority waived about $1,500 in fees to help bring the plane to Kingman at Thursday’s Board of Directors meeting.

He said the airport is also giving EAA counter space in the terminal to sell tickets, parking space for a parts trailer and souvenir trailer, and extending hours for the airport café.

“I flew on it in Las Vegas and it’s worth every penny,” said Tom Clark, attending the meeting. “It’s a working piece of history.”

For EAA members the flight cost is $435. Non-members pay $475 (includes a one-year membership).

Ground tours are $10 for individuals, age 8 and under free, $20 for families. Veterans and active military are free.

In other items on the board of directors’ agenda:

• The board approved a $6,000 increase in dross site funding, taking it from $14,000 to $20,000. Brenda Chastain, director of corporate administration, said the authority has been waiting four years for the dross remediation to be approved, and this will help start the bore and testing.

Riley explained that 30 holes will be drilled to a depth of 21 feet in an area where dross mounds have formed. “We know what the product is,” Riley said. “We don’t know the degree of degradation and how much heat and gas is being emitted.”

• The board extended a one-year lease of about one-third acre of airport property for Gary Rucker.

The item was scheduled for closed session, but airport Executive Director Dave French said the same extension has been granted for the last four or five years.

• The board approved an “opt-in” letter to participate in the ADOT preservation program for rehabilitating runway 3/21.

The funding had been pulled by ADOT, but Chastain said she received a call in December that it was reinstated. KAA will match $53,326.