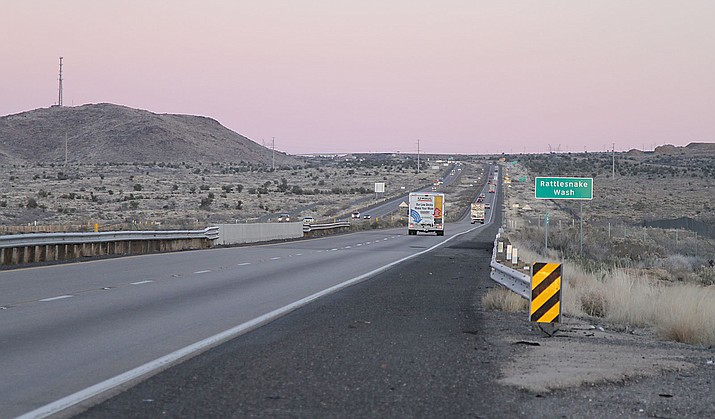 A public-private partnership is being presented to the City Council as part of a workshop at 2 p.m. Tuesday at Kingman Police Department, 2730 E. Andy Devine Ave.

Forget about waiting for Arizona Department of Transportation and the federal government to fund construction of an interchange at Rattlesnake Wash off Interstate 40.

An alternative solution is to form a public-private partnership to pay for the interchange, once estimated at $50 million, said Bill Lenhart, managing member of Sunbelt Development and Realty of Las Vegas.

He’ll be attending a workshop at 2 p.m. Tuesday with the Kingman City Council to discuss that opportunity and try to steer them away from Kingman Crossing, which is being postured as the economic savior in a town that relies so heavily upon sales tax revenue.

Brick-and-mortar retail continues to lose revenue to online shopping, leading to store closures for Radio Shack, Hastings and Hallmark in one shopping center alone, and putting giants such as Sears and Kmart in a position of closing stores across the nation.

Lenhart believes the wiser choice is to pursue an interchange at Rattlesnake Wash, which was once approved and funded as part of ADOT’s five-year plan.

The interchange would be about three miles east of the Andy Devine Avenue-Route 66 exit and would access the proposed Rancho Santa Fe Parkway running from Hualapai Mountain Road under the freeway and north to Kingman Airport and Industrial Park.

As a matter of disclosure, Lenhart owns about 1,000 acres in the area between I-40 and Kingman Airport and Industrial Park.

“We will be attending the workshop with nationally recognized consultants to share our vision for the future development of our properties,” Lenhart said.

“In addition, my consultants will be introducing alternative capital sources to assist in funding the infrastructure that has been a barrier for Kingman’s growth.”

Mayor Monica Gates and Councilman Travis Lingenfelter ran on a pro-growth platform for November’s election, with the mayor stressing the importance of moving forward on the interchanges.

However, Kingman has limited resources to fund the interchanges, so the council is focusing only on Kingman Crossing.

Tuesday’s workshop, to be held at City Hall, 310 N. Fourth Street, will include a presentation from Mohave County Financial Services Director Coral Loyd on Kingman Crossing, along with a presentation from Hutchison, Shockey, Erley and Co. regarding funding of the project.

Lenhart said he recognizes Kingman’s funding limitations, but believes the city hasn’t fully explored all potential funding sources, nor has it evaluated the effects of building Kingman Crossing and Rancho Santa Fe as standalone interchanges.

While the city’s momentum is behind Kingman Crossing, including a voter-approved initiative to sell city-owned land for fair market value, the Rancho Santa Fe interchange would better stimulate the local economy, Lenhart said.

“Candidly, I do not know why the new administration is pushing Kingman Crossing,” he said. “The interchange will have a much lesser impact on the city of Kingman than the Rancho Santa Fe interchange.”

Kingman Crossing does nothing to provide access to the Airport Industrial Park, he noted.

Bob Riley, director of economic development for Kingman Airport Authority, said the Rattlesnake Wash interchange would knock about a mile off truck transportation each way to and from the airport.

“That’s substantial in truck miles over time,” Riley said. “The volume of trucks day after day is substantial, sometimes as many as 1,800 trips a day. I think what this (workshop) demonstrates is there is an issue of which is the city’s priority, Kingman Crossing to get done first or Rattlesnake Wash to the airport, and that has yet to be defined. Certainly from the airport standpoint, we’re looking at Rattlesnake Wash.”

Lenhart is certain that a comparison of economic benefits from building the two interchanges would prove that Rancho Santa Fe would contribute much more to the economy than Kingman Crossing.

“However, the city is only authorizing expenditures to explore Kingman Crossing, which is troubling,” he said. “Whatever course of action the city takes relative to these interchanges will have a long-lasting impact on the future of Kingman.”

City Council in December paid $10,000 to Applied Economics to perform a financial analysis to estimate the increase in revenues created by Kingman Crossing, which would be used to attract financing.

However, no such report has been requested or authorized by the city for Rancho Santa Fe, so Lenhart has done his own. He’ll present his insights at Tuesday’s workshop.