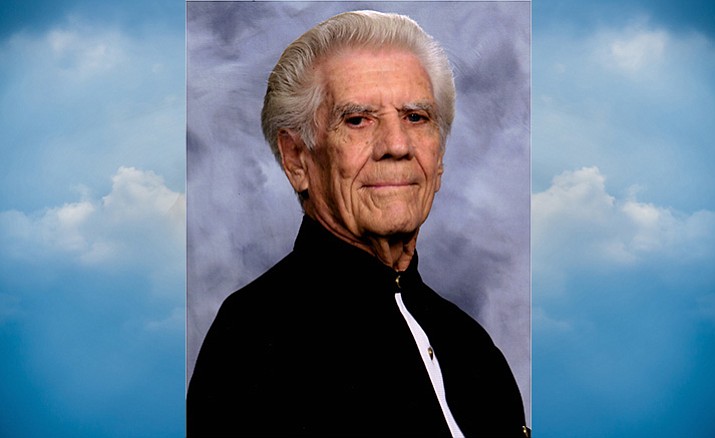 Douglas Leslie Poole Sr. died peacefully in Kingman, Arizona, on Tuesday, January 17, 2017 at the Joan and Diana Hospice House, at the age of 93.

Douglas is survived by children, Douglas Leslie Poole Jr. (Beverly), Terry Lee (Deanna), both of Kingman, Arizona, and Stephanie Dee Poole of Long Beach, California. He had 10 grandchildren and 18 great-grandchildren. He also leaves behind his girlfriend, Lori Lavigne. He was preceded in death by his parents, siblings, daughter, Bonnie Jean Poole (1963), and his wife, Beatrice Marie Poole (1995).

Douglas Leslie Poole was born on February 3, 1923 in Windsor, Ontario, Canada to George Poole and Margaret (Workman) Poole. He was the third of six siblings. He graduated from the Henry Ford trade school in 1940.

He married Beatrice Marie Braden, his childhood sweetheart, in 1947. They settled in Dearborn, Michigan.

He joined the Army Air Corps in 1943 and was training to be a pilot when the war ended, and he was honorably discharged. Douglas began working for Ford Motor Company as an automobile design engineer.

The family relocated to Lake Havasu City, Arizona in 1972 where he was transferred to the Ford Proving Ground. He retired from Ford in 1978 after 42 years.

After retirement, he enjoyed playing the harmonica, the organ, roller skating, and ballroom dancing. He also enjoyed designing custom homes for many builders. He continued to do this up until his death.

He was on the Lake Havasu School Board for five years and was an active member of St. Michael’s United Methodist Church until his death.

A memorial service is scheduled for 2 p.m. Feb. 4 at Journey Church (3782 N Bank St.), Kingman, Arizona, with a reception to follow. All are welcome to attend and celebrate Doug’s life.

The family would like to thank the staff of Lake Havasu Regional Hospital and their skilled nursing unit, and the staff of Joan and Diana Hospice Home in Kingman for their compassion while caring for Douglas in his last days.