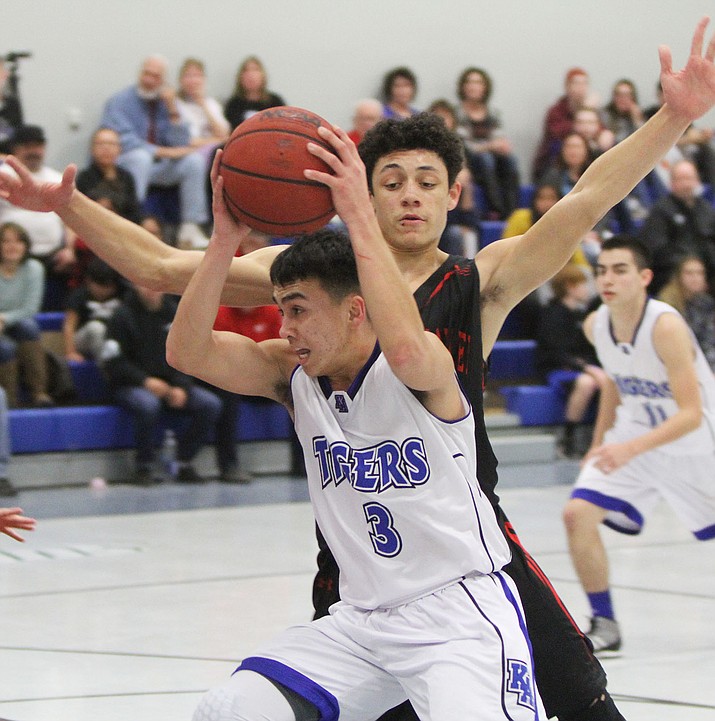 KINGMAN – Kingman Academy played a sluggish and sloppy game at home, yet it was good enough for the Tigers to wrap up a region title. The win means a first-round bye in the state tournament. Even if the Tigers were to lose their last two games, they own the tie-breaker with Trivium Prep having defeated them twice this season.

Senior David Larrabee showed why he should be an All-State selection this season. He carried his team by scoring 36 points in a 62-56 victory over Tonopah Valley, Friday night at Betty Rowe Gymnasium.

“Tonight was a sloppy game,” said KAHS boys basketball coach Brian Devincenzi. “Not as precise as we should have been. The kids are ready for the regular season to be over with. Everyone knew Trivium was a crucial game, we got over that. I hope we don’t let ourselves slide and we can finish this thing out 10-0.”

At KHS, the Bulldogs held on for a 71-64 victory over Chino Valley to keep their state playoff hopes alive. This victory ties coach Nick Juby’s win total from last year with eight wins.

“Tonight was a tremendous win, Juby said. “ I could not be any more proud of the way the team played tonight, especially playing without Elijah (Howery), who sat out due to injury.”

Kingman (8-16, 3-4 3A West Region) had Anthony Pinto back. Pinto did work inside the paint to the tune of 31 points. Jordan Dupee added 15, Jayzon Hundley 13, Jonathan Hunt 5, Tony Napier 4, and Tobias Bagby tallied 3 points.

“The last time we played them, they had a guy go off and hit some huge momentum building three-pointers against us,” Juby said. “I was determined not to let that happen tonight. We implemented a box-and-1 strategy to completely take him out of the game and to also take the entire rhythm out of the offense. And it worked phenomenally.”

Juby credits Hunt for his defense in the box-and-1 and feels proud of him for being a team player.

“That win also keeps us very alive in the playoff race,” Juby said. “We have three games left, and winning those final three will put us in the state tournament, which has been our goal all season.”

At LWHS, Lee Williams’ Sadie Snay scored 19 points, including hitting five 3-pointers to keep the Lady Volunteers in the game against Prescott. The Lady Vols could not find scoring from anyone else.

Lee Williams had its chances at the end of the game when its defensive pressure made the Badgers turn the ball over seven times in the last two minutes. The Lady Vols could not knock down their free-throws, going 5-16 for the game, as they suffered a home loss to Prescott Friday,35-29.

No one else scored in double figures and the Lady Vols’ power forward Chania Scott played with foul trouble for most of the game. Scott picked up her third foul in the second quarter. Every time Scott received the ball in the post Prescott’s defense collapsed on her forcing her to pass out of double teams or turn the ball over.

“I made a bad decision to play Chania (Scott) in the second quarter,” Arave said, “I allowed her to pick up her third foul. Not having Chania in much of the game hurt us.”

Madison Arave had eight deflections and five steals in the game.

Lee Williams is in fourth place in the region (11-11, 3-6 4A Grand Canyon Region) with three games left.

Lee Williams travels to Mohave for a 5:30 p.m. tip Tuesday.

The Lady Bulldogs face Wickenburg in Wickenburg at 5:30 p.m. Tuesday.

At KAHS, the Lady Tigers playing in their final home game of the season was lambasted by Tonopah Valley 54-24, and it wasn’t that close. With the loss, the Lady Tigers are tied with Parker Broncs at 5-3 in the region.

“I think we had a game,” Tigers coach Garth Steed said. “At least the other team showed up.”