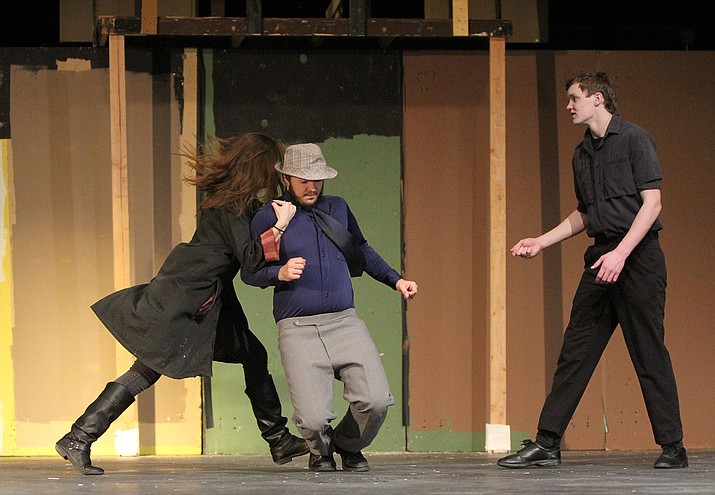 From left to right, Celine Lucero-White, Brodee Wilson and Scotty Winder rehearse a scene in “MacBeth.”

A report in Friday’s Daily Miner inadvertently omitted tonight’s 7 p.m. performance of “MacBeth,” at Kingman High School. The student-directed play will be performed at 7 p.m. Friday and Saturday, as well.

KINGMAN – A local student will literally close the curtain on his high school experience. Kingman High School senior and thespian Daniel Pozenel is the school’s first student play director, and he chose one of the more challenging plays penned by arguably the world’s greatest playwright, William Shakespeare.

The KHS Drama Club will present Shakespeare’s “Macbeth” at 7 p.m. Friday and Saturday at the Hilda Aguilar Theater at KHS.

There’s a twist to this production. Instead of the classic 17th century tale of a Scottish general’s quest for power that leads him into a descent of madness and death. Pozenel – with the artistic nudge of KHS drama teacher Brandon Weaver – moved the setting to the 1920s and the struggle between Italian and Irish mobsters. The changes he made include changing the three witches to gypsies and changing the title of king to Don.

KHS produces three plays a year (one is a musical joint effort with Lee Williams High School) and Pozenel has been a cast or crew member in every one since his freshman year. His interest in the performing arts began when he took acting classes in junior high and he’s been honing his talents ever since.

Pozenel has worked briefly in front of the camera in a local short film and said he enjoyed it, “but not as much as acting on a stage.”

“I can be exotic with my movements and be more outgoing,” he said. “I feel like I’m not trapped inside a box when I’m acting.”

With the exception of the spring musical production at LWHS this spring, “Macbeth” will be Pozenel’s last curtain call in high school. He’s been working with a cast and crew of about 40 actors, sound, lighting and prop technicians and stage managers since November. He plans to go out in style.

“I want to put my skills to the test,” he said.

Pozenel worked with Weaver to take the reins of the production, to which Weaver was more than delighted. Weaver admitted he’s not the biggest fan of Shakespeare and suggested changing the story’s characters and setting. Pozenel got to work and in about two weeks, whipped out a modernized script, held auditions and started production.

Weaver sat backstage for the most part, but has been present during rehearsals to mentor the young director.

“I want to make sure it’s done right,” Weaver said. “So far I’ve been very impressed.”

Weaver said he’s glad to let someone handle the hectic pace of a stage production. By letting Pozenel get his hands dirty, he’s set up the student for success.

“This is an amazing experience for him,” Weaver said.

Pozenel has significant college aspirations. He intends to stay on his current path in performing arts and has considered attending New York University. He has applied to Columbia University, both of which have strong drama programs. He hasn’t heard back yet.

He’s ecstatic to see the pieces of a performance puzzle come together. Between enduring the long hours of rehearsals – both for cast and crew – and watching the scenes, props and sets take form, he’s more than ready for opening night.

“It feels like a true accomplishment,” he said. “One of the greatest ever.”

General admission for “Macbeth” is $5, $3 for students with identification and free for veterans and kids under 8.