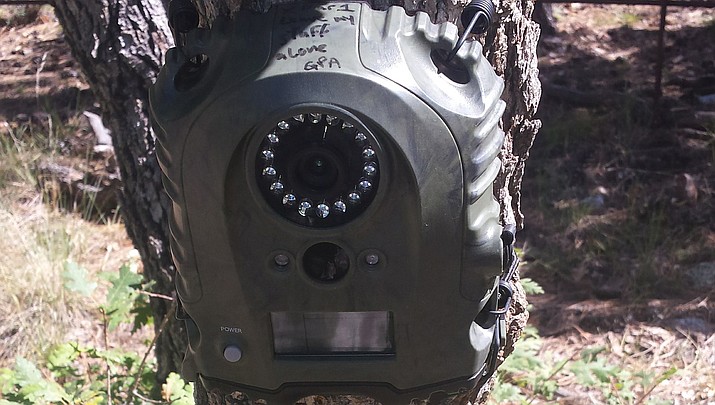 Under the proposed regulations, it would be illegal to have a camera such as this one within a quarter-mile of a water hole.

If you are one of the many sportsmen in Arizona who uses trail cameras in the pursuit of your sport, stand by, for there may be changes coming on how and where they can be used.

Recently, I learned that the Department is going to propose to the AZGF Commission changes they felt need to be made on rules that cover the use of these devices. Trail cameras are primarily used by hunters and others to check for animals that are visiting water sources.

These cameras have come a long way from when they were introduced, and now the Department feels that due and evolving technology they need to regulate how and where they can be used.

The technology associated with these cameras has evolved a lot. Live, real time information can be transmitted to the owners of the camera who are often times far away and not even in the field.

And that is just part of the problem with cameras, according to the Department.

Every five years, there is an open review under Article 3 by the Department. There is a committee known as the “Fair Chase Committee,” which is made up of 12-15 persons both from inside and outside the Department. This committee reviews various rules, including the take of wildlife, and makes recommendations on any changes it feels is appropriate.

Kingman resident and guide, Craig Steele is reportedly on that committee.

I spoke with Darren Tucker, who is the Prescott area supervisor about this issue.

“The issue with the use of trail cameras involves Fair Chase,” Tucker said.

The Department definition of Fair Chase is “the ethical, sportsmanlike and lawful pursuit and take of free-range wildlife in a manner that does not give the hunter or angler improper advantage over such wildlife.”

Tucker noted there are other issues with newly developed technology besides cameras. The use of drones and so called smart rifles are also issues that are being addressed. Arizona has already outlawed the use drones in the pursuit of wildlife as they are considered aircraft.

Tucker noted that some restrictions that are being proposed include prohibiting cameras being placed within a quarter mile of a water source, and real-time cameras that transmit images cannot be used at all.

Tucker emphasized that these are only proposals and the public will have ample time to weigh in on these issues before the Commission makes a final decision.

The Department published on its web page, “The Commission will monitor and give careful consideration to the Fair Chase implications of an emerging or evolving technology or practice.”

The camera restrictions have and will cause concern for many hunters. Most local hunters own a few, but there are commercial outfitters –mostly those who operate on the Arizona Strip who reportedly have hundreds of cameras that are used year around.

Local sportsmen need to weigh in on these issues. Right now, nothing is set in stone on these rules. But soon there will be new rules, and once that happens the time to comment and offer input will be gone.

Stay engaged and involved. It is your sport!