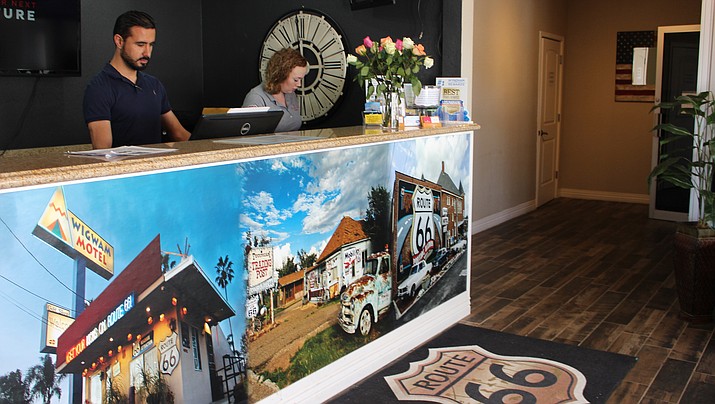 Ramada Inn general manager Sultan Abbas, left, and clerk Valicity Plumley work the front desk at the 95-room hotel off Interstate 40 at Andy Devine Avenue. The hotel has seen an increase in cancellations from tour groups, particularly of international origin.

President Donald Trump’s travel ban on visitors from six Muslim countries may be a step to protect the United States, but it’s reverberating around the world and coming back to hurt the tourism economy, Ramada Inn sales manager Bob Walton says.

Walton had a tour group of South Koreans cancel 30 room nights at the Ramada, and cancellations overall have increased this year by 83 percent, according to a hospitality industry study by MonkeySurvey.

“I like what he’s doing, but there’s going to be some collateral damage because it affects tourism,” Walton said during an interview at the 95-room Ramada that branded itself with the Canyon 66 Restaurant and Lounge and Americana-themed mural artwork.

“If Bernie Sanders or Hillary (Clinton) were there, they’d be affecting something else,” he added.

The ban that went into effect Thursday bars a subset of foreign nationals from six majority-Muslim countries (Iran, Libya, Somalia, Sudan, Syria and Yemen) with no connection to the United States. The Supreme Court is set to hear legal challenges to the ban in the fall.

SurveyMonkey conducted a survey in April with a handful of tour companies and found that nearly 67 percent reported a decrease in bookings, 26.7 percent saw an increase and 6.7 percent had no change.

A lopsided 93.7 percent of cancellations were from inbound groups of international origin, while 6.7 percent were domestic.

Asked about the reason for the change, an equal number (38.5 percent) of respondents marked President Trump’s travel ban and the exchange rate for the U.S. dollar. Difficulty obtaining visas was marked by 23.1 percent, and nobody marked terrorism.

Primary markets for clients in the survey included the United Kingdom, United States, Europe, China, Japan, Germany and France. The largest target age group for the survey was 45-55 years old.

July and August numbers have already declined for Victor Choi, a tour group operator from Los Angeles who specializes in Asian clients.

“What I feel is the time they spend at check-up (for a visa) is longer and more people are rejected,” Choi said. “From the local side, people are afraid to travel outside the U.S. with a minor record, even a DUI, so the outbound decreased as well.”

Sultan Abbas, general manager of the Ramada and a native of Lebanon, stands firmly behind the president’s directive on visitors from countries that pose a security threat to the United States.

His brother and uncle were recently denied visas to visit him in Kingman, though he was able to visit them in May and found border agents to be “very helpful” in both countries.

Hotel cancellations happen throughout the year for a number of reasons, Abbas noted. There could be a change in someone’s schedule, financial considerations, personal problems and visa challenges.

“We totally respect the president’s decision to protect our own home,” Abbas said. “He’s doing it from his shoes and totally right about it. The increase in domestic tourism is a good sign for the local economy. That’s something we need.”

Abbas said occupancy rates at the Ramada have stayed around 80 percent to 85 percent, with some summer weekends selling out. He captures a lot of traffic to the Grand Canyon from Asian and Canadian tour groups.

Ramada is doing well compared with other hotels.

Sunil Patel, manager for Advance Management and Investment, said occupancy is down at the six hotels and motels he oversees in Kingman, which include the Hampton Inn, Holiday Inn Express and SpringHill Suites by Marriott.

“What I can say compared to last year is a lot of people are not going on the road,” Patel said. “Not only the travel ban, yes, but I think people don’t want to drive in Arizona because they may be stopped for immigration.”

It’s estimated that President Trump’s temporary travel ban could cost the U.S. tourism industry $18 billion in lost revenue, affecting airlines, hotels and other companies, according to a report in USA Today.

Marriott, the world’s largest hotel chain, suffered a 10 percent decline in U.S. bookings from Mexico and a 25 percent to 30 percent decline from the Middle East, CEO Arne Sorenson stated in March. Expedia and Hyatt Hotel Corp. noted a slowdown in international tourism as well.

Patel, manager of more than 500 hotel and motel rooms in Kingman, is stumped about the decrease in occupancy.

“The travel ban may scare people from coming,” he said. “Maybe people don’t like this kind of ban. Maybe. Nothing has changed from last year except the immigration stuff being enforced. That’s what I guess. Some part may be related to terrorism, I’m not sure.”

Patel said the strength of the U.S. dollar against foreign currency might have an impact on a few tourists, but the economy is not much different than it was a year ago, so it’s all guesswork as to why fewer people are staying in Kingman.

“Nobody comes to Kingman as a destination,” Patel said, “but they go to the Grand Canyon and after driving all day, they stop in Kingman. The next stop is two hours away.”