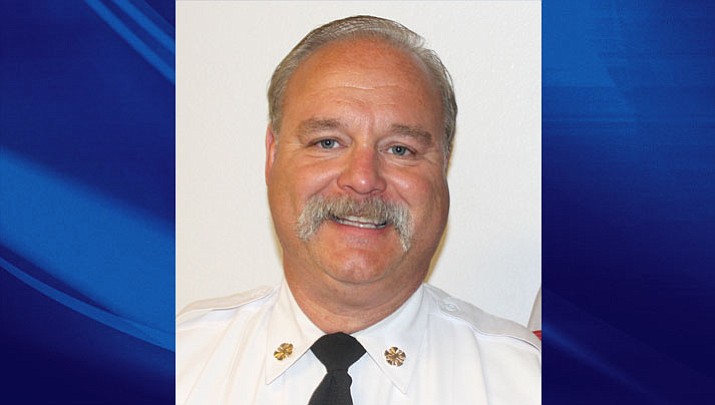 KINGMAN – The political brouhaha that has beleaguered Northern Arizona Consolidated Fire District nearly since its inception rages on with the indictment of interim Fire Chief Wayne Eder and board members Sue Wilkin and Vic Riccardi.

They are each charged with misuse of public funds and conflict of interest regarding fire truck repairs made at Riccardi’s automotive shop in Valle Vista. The defendants are scheduled for a July 17 arraignment in Mohave County Superior Court.

Eder did not reply to a request for comments. The fire district has scheduled a special meeting at 6 p.m. today at NACFD Fire Station 31, 2485 Northern Ave.

Board Chairwoman Patti Lewis and Riccardi are also the subjects of a recall petition filed in March. A subsequent petition was filed to recall board members Mike Collins and Jim Bailey.

It’s all part of the fallout from the December resignation of former Fire Chief Patrick Moore, and the controversial 3-2 vote in March to bring Eder back as interim chief. He previously served from 2003-2008.

Lewis told the Daily Miner the United Professional Firefighters of Kingman is pushing to remove her and Riccardi from the board and to replace Eder with a union chief.

The conflict over the $1,357 fire truck repair bill was brought forth by Collins at a board meeting in May.

Eder said the truck was near Riccardi’s shop in Valle Vista, 20 miles away, and he didn’t want to have it towed to another shop that is unfamiliar with fire truck mechanics.

Lynne Hucker, who recently resigned as NACFD secretary and is now working for Collins, stated that Wilkin allegedly brought the repair invoice to the fire station and took the check back to Riccardi’s shop.

There was also a dispute over Riccardi failing to attend required training courses for fire district certification, which came before the Mohave County Board of Supervisors.

County Attorney Ryan Esplin found that Riccardi completed the training in April, and told the board that there’s no need to pursue further action in Superior Court.

Valle Vista resident Rick Veradt addressed concerns about NACFD during a public comment period at Monday’s regular meeting of the Mohave County Board of Supervisors.

He had a number of questions for the board, asking why former chief Moore paid for Riccardi’s training that supposedly didn’t happen, and why Moore is working for board member Collins.

He wanted to know why nobody has investigated Moore for buying a former hay and seed building on Northern Avenue for $500,000 during the recession. At the same time, Moore closed four fire stations and cut back on personnel because of budget constraints.

“The building has yet to be used. Is this not misuse of public funds?” Veradt asked.

Veradt chastised Supervisor Jean Bishop for publicly attacking Riccardi, who formed the Valle Vista Fire District and served as its chief before it was consolidated with other small fire districts.

“It seems reasonable to me if you’re going on a witch hunt, you should at least hunt the right witches,” he said.