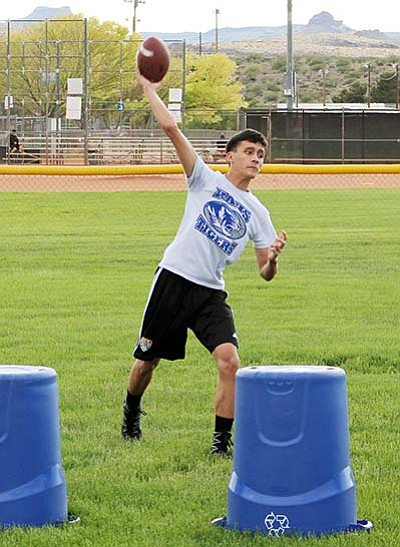 It seemed as if yesterday I was covering high school baseball and softball, and now I look at the calendar and the official start of football practice is right around the corner.

If a team doesn’t have a zero week game, it can begin practicing July 24. If the team does, it can start July 31. Both dates amaze me, as I remember when I was in high school that most prep teams were just attending summer camps at this time of the year.

The Arizona Interscholastic Association passed a measure in March that allows coaches to hold year-round practices.

While I applaud the freedom the AIA is giving schools, it makes me wonder how this measure will affect athletes. I feel specified practices for each sport allows a break during the offseason. Athletes are also more likely to participate in more than one sport if practices don’t overlap.

Year-round practices, however, do bring a few positives – such as more talented and conditioned athletes.

But is that worth the disadvantages?

I feel this measure is more in favor of coaches holding practices whenever they want, rather than being about the athletes who play the sports.

Athletes constantly being in practice mode could prove detrimental if their body doesn’t have time to recover. Also, one sport may have practices that interfere with another sport.

Some coaches might allow athletes to balance their practice time between sports, but anyone who has played a sport knows – coaches want their players at every practice.

An athlete deciding to spend just an hour more focusing on one sport could easily see their playing time decrease. However, it is a touchy subject that I’m sure most coaches don’t want to discuss.

A coach’s No. 1 priority is to find the best athletes who can make up a successful team on the field.

With that said, only time will tell how this measure works out.

As far as I know, high schools in different states haven’t adopted this measure. With a quick Google search, I discovered that even Texas high schools – where prep football is king – didn’t like the idea of year-round sports.

Dr. Charles Breithaupt, executive director of the Texas University Interscholastic League, summed up it perfectly in an article on AZcentral.com.

“… Most of coaches believe that athletes need time away from them and vice-versa,” he said.

“Even the NFL and NBA have periods of dead time, allowing coaches to coach year round is not something our coaches or schools are interested in at this time.”

Only time will tell how this measure works out, but I feel there should have been more research on the matter before just enacting it. However, on the flip side, the only way to find out if it works is to test it out.

Hopefully, for the sake of the athletes, the AIA knows what it is doing.