Have some dirty fun at the 39th Mud Mania Thursday 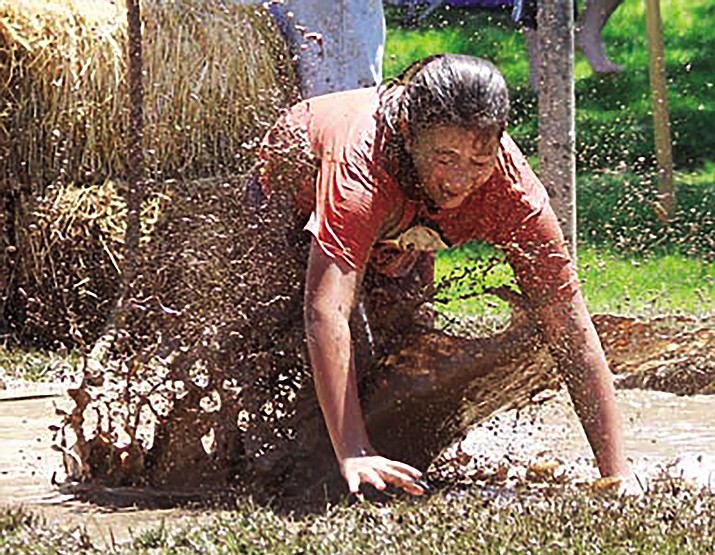 Prepare to get filthy.

The City of Kingman Parks and Recreation Department will host its 39th Annual Mighty Mud Mania starting 10 a.m. Thursday at Firefighter’s Memorial Park, giving hundreds of children, teens and adults an excuse to get down and dirty.

Playtime is limited. Kingman Unified School District starts classes July 26 and Kingman Academy of Learning Aug. 14. Some people have asked why the event is on a weekday when many parents have to take off work.

“Because of the man-hours,” said Recreation Superintendent Yvonne Cossio. About 25 city employees are needed to organize and run Mud Mania. Those employees do everything from pre-event projects such as digging the trenches (which started Monday) and building the obstacles, to timers and registration slots.

“If it was on a weekend, we’d have to pay overtime,” Cossio said. Parks and Rec employees would also have to use flex time, which would take them away from their already busy weekly work schedule.

Mud Mania has been a summer tradition since 1978 when the park was called Wia Manua Park, home to two large ponds. That was long before accidental drowning lawsuits and water usage was a concern.

Hardly enough water is used for it to be a concern.

The city uses water tapped from the park and only uses it to fill the pits, occasionally spraying the mud to keep it wet and sticky. Even the Kingman Fire Departments HAZMAT shower used to hose off muddy competitors is manually operated to save water.

Boys and girls compete separately to see who can navigate the obstacle course the fastest. The champion and runner-up in each age division is awarded a Mud Mania T-shirt and the champion will also receive a Mud Mania Trophy. Age divisions are divided into 4 and 5 year olds, 6 and 7, 8 and 9, 10 and 11, 12 to 14 years, 15 to 17, 18 to 34 years and the senior division of 35 years and older.

But why not more adults?

“We don’t get that many who sign up for that age division,” Cossio said.

Cossio has been with Parks and Rec for 18 years and has been involved in Mud Mania since then. She’s seen her share of regulars.

“We used to have a man, probably in his 70s, drive down from Flagstaff every year up until a couple years ago,” she said. “I haven’t seen him, so I think he may have passed away.”

She said former Mayor John Salem also hit the course once. There’s been no word on any city officials participating this year.

“I really hope people are honest about their (kid’s) age,” Cossio said. Parents often try to slip in kids who aren’t old enough to participate – the allowable starting age is four. “It’s a safety measure. If a two year old is in with five year olds, they’re going to get hurt.”

Since last year, the Mud Mania course has been changed to accommodate some of the younger kids. Some of the younger age groups will start at a mud pit instead of the hay-bail, low-crawl obstacle, which has tightly enclosed surroundings that have induced panic in some children.

“It really freaked some kids out,” Cossio said. “They’d get a great start and then back off when they realized they couldn’t stand up.”

“I’ve never been able to determine why the numbers change so drastically,” she said.

The event is free. There will be hot dogs, chips, snow cones, pickles, water and soda available for purchase. Event T-shirts are $12 for youth sizes and $15 for adults.

One more thing: make sure your clothes are on tight.

“If you lose it, plan on not getting it back,” Cossio said. “We can’t guarantee we’ll find it.”