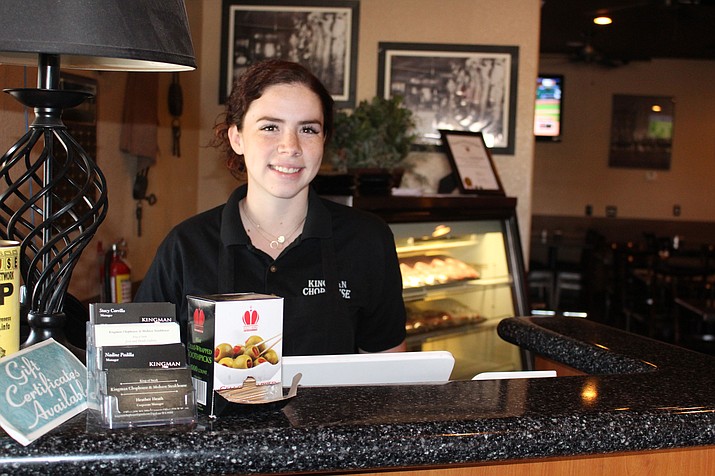 Taylor Henderson, 17, welcomes customers at Chophouse restaurant in Kingman, where she has worked since May. She’s among the 43 percent of survey respondents who did not know about the new law that went into effect in July mandating paid sick leave for all employees.

Workers in minimum-wage jobs such as restaurants and retail have begun accruing paid sick time based on the company’s size effective July 1, part of Proposition 206 that raised Arizona’s minimum wage to $10 an hour this year.

Research shows that many employees have no idea about the law, and also looks at whether people care more about sick leave or other benefits such as maternity and paternity leave.

A survey by time-tracking software firm TSheets found that 43 percent of 316 respondents were not aware that Arizona employers would be required to offer their employees paid sick leave starting in July.

Taylor Henderson, a 17-year-old hostess and busser at Chophouse in Kingman, is among the 43 percent. She works 10-15 hours a week at the steak restaurant.

“That sounds good,” Henderson said when told about the new law. “I think it would be nice, but I don’t think I’ll need paid time off because I have school and I don’t have that many hours to work.”

Another 17-year-old girl working at Golden Corral restaurant said she’d never heard of the law, and had no idea of whether it’s good or bad.

“We wanted to find out how much people knew about the changes to Arizona’s sick leave regulations and whether they support the move,” said Simon Worsfold, analyst for TSheets.

“The minimum wage increase has dominated the coverage in recent weeks, but for many businesses, Proposition 206 (paid sick leave) is just as significant. For one, it’s harder to plan for than a wage change and this is why it’s so important for people to know about it.”

Prop. 206 mandates that employers pay for accrued sick time effective July 1, but not all businesses offer the same amount. It’s based on the number of employees on the company payroll.

The minimum requirement of paid sick leave is 24 hours for businesses with fewer than 15 employees. Those with 15 or more employees are required to pay up to 40 hours of accrued sick time every year.

The rate of accrual is one hour for every 30 hours on the clock, and includes salaried employees who work 40 hours a week.

If an employer has a policy that provides an amount of paid sick leave that meets or exceeds Arizona’s minimum requirements, the employer is not required to provide additional paid sick time.

Also, some employers lump all PTO into days that can be used for vacation, sick leave or personal reasons. They can carve out five of those days for sick leave, effectively taking away vacation days.

Must give employees notice of their right to paid time off.

Must post a notice about employees’ rights and keep detailed records of the business’s policies for workers to access.

Must include updated information about employee’s available sick leave on their paycheck.

May require employees to provide documentation of their situation after three consecutive days of work missed for medical reasons.

Must understand that paid sick leave cannot be used for disciplinary action.

Jesse Godinez, owner of the Chophouse and Mohave Steakhouse in Bullhead City, said he has about 40 employees between the two restaurants, and he’s just going to have to deal with the new law.

“I guess looking at it, it’s not much. I don’t think it’s going to be that bad,” Godinez said. “I just got our first payroll yesterday, and nobody accumulated over two hours this pay period, so it wasn’t that bad.”

Godinez said he was a little worried about handling the call-offs, or people calling in sick. But he doesn’t want sick people working at the restaurant, and if he sees they’re sick, he sends them home.

Gregg Martin, president of the Kingman Area Chamber of Commerce, said business owners recognized that paid sick leave was a component of Prop. 206, and they’ve been talking about it for six months.

“It’s just an unfunded piece of legislation that businesses have to find a way to incorporate and absorb,” Martin said. “Bottom line, it’s just an expense that has to be covered.”

There’s a certain amount of “red tape” that comes with tracking and reporting requirements for paid sick leave, he added.

“Everybody will worry and stress over compliance,” Martin said. “It’s not the easiest law to understand.”