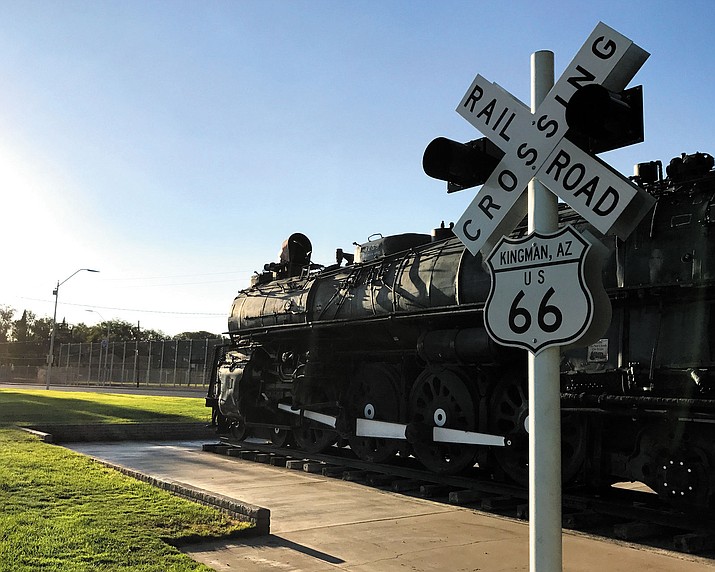 Stopping for a photo and rolling through the grass are just two positive characteristics offered by Locomotive Park that appeal to both locals and tourists.

KINGMAN – What’s it going to take to make downtown more pleasing to the eye and the soul for locals and tourists?

That’s what about 20 invigorated city council members and employees, business owners and residents from all over Kingman wanted to figure out as they gave their input at the Placemaking workshop presented Thursday, one of three Main Street Arizona Town Hall meetings at Beale Celebrations.

Brought forth before facilitators Lani Lott of Arizona Downtown Alliance and Jim McPherson, volunteer president of Arizona Preservation Foundation, were ideas and strategies on how to turn downtown Kingman into a center of business, culture, arts and nightlife. Also discussed was how downtown could be improved to make Kingman a destination, not just a pit stop.

“I’d like to see Kingman the type of place I’d want to go if I didn’t live here,” said aviator and business owner Paul Gaines.

Suggestions of bike lanes, more trees and green space, benches, improving and beautifying the facades of downtown businesses and creating events that would keep the streets free of vehicle traffic – at least a few times a month – resurfaced numerous times.

Lott explained that what people see when they first drive through town determines what will make them stay.

“For people, visual is a first impression,” she said. “They’ll forgive no bike lanes or bigger sidewalks, but weeds and unkempt buildings show that there’s no sense of pride. We’re not trying to reinvent downtown, just leverage what we have.”

Gaines cited Boulder City, Nevada as a place that has reinvented itself to attract more tourists. He travels frequently to Las Vegas and intentionally detours off of U.S. 93 down Nevada Way, the city’s revitalized downtown district, “just to see what they’ve done.”

“Why just breeze through?” he asked. “Make something people want to drive through.”

Lott suggested defining downtown’s boundaries and identity as a first step in the revitalization process. Getting all businesses to work together is next. While most downtown businesses are working together to improve the district, others are holding out. The overall goal of the workshop was for residents to come up with a master plan.

“You don’t leave them out,” Lott said. “You invite them to be part of the plan, as much as you can.”

Forming a network is part of the master plan. Weed abatement, trash and communication take teamwork.

“It’s about education,” said City Grant Administrator Bill Shilling. “Give our neighbors a way to look at, and contribute to, the master plan.”

He pointed toward city leadership as a reason for the community’s revitalized interest in improving downtown’s aesthetics, design and infrastructure.

“We’ve never had the councilpersons with the drive to champion this type of effort,” he said, with council members Travis Lingenfelter, Jamie Scott Stehly, Stuart Yocum in attendance. “Now we do.”

Assistant City Engineer Frank Marbury was well aware that funding the improvements will be the biggest hurdle. He’s worked on other downtown revitalization efforts in Colorado and Georgia and he’s ready to help make it happen here.

“We want direction from the public,” Marbury said “We’ll do our best to make it happen.”

It takes a village, and that village is tightening its bootstraps.

“Who owns downtown?” Lott asked. “It’s not owned by anybody, it’s owned by everybody.”

The next Placemaking workshop is scheduled for 5:30 p.m. Aug 16. No location was determined but will most likely at be at City Hall 310 N. Fourth St.