Outpouring of support for McCain comes from far – and weird 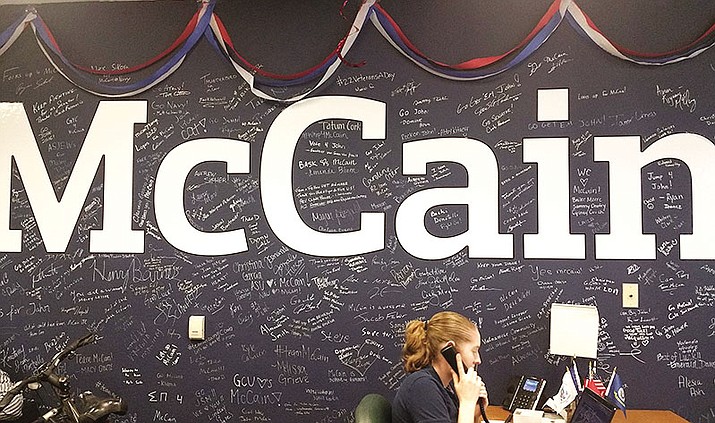 An intern answers phones at Sen. John McCain’s Phoenix campaign headquarters in this 2016 file photo. The news this week that the Arizona Republican has an aggressive form of brain cancer brought messages of support from political heavyweights to pro athletes, from regular citizens to off-beat comedians.

WASHINGTON – The outpouring of support following this week’s announcement that Arizona Sen. John McCain has an aggressive brain tumor came from the expected Washington heavyweights, including current and former presidents, lawmakers and Cabinet members.

It also came from some unexpected sources: pro athletes like Larry Fitzgerald, authors like Stephen King and actress Rosie O’Donnell. And it came from some truly unexpected people like stoner comedian Tommy Chong – as well as untold numbers of regular Americans.

“I hope Sen. McCain surprises us the same way President Carter did when he was diagnosed with brain cancer,” Guajardo tweeted. “I wish him a speedy recovery.”

The breadth of the response may not be surprising for a man with decades in the public eye – and 2.3 million followers on Twitter on which he is active. Because of that “level of celebrity,” it also makes a social media post acceptable in a situation where a more traditional expression might otherwise be appropriate, said Crystal L. Bailey, director of the Etiquette Institute in Washington.

It is “good to see a little bit of civility in Washington,” said Bailey, as opposed to the bickering and animosity that has become the norm. She compared it to the solidarity that followed a shooting earlier this summer as members of Congress were practicing for an annual charity baseball game.

Bailey called the outreach in response to McCain’s diagnosis “impressive.”

Since news broke Wednesday that McCain had been diagnosed with a glioblastoma, social media messages have come from President Donald Trump – who famously sparred with McCain during the campaign – and former presidents Barack Obama, George W. Bush, Bill Clinton and George H.W. Bush.

Former secretaries of state Condoleezza Rice and Hillary Clinton weighed in, along with congressional leaders and pundits ranging from Rachel Maddow to Bill O’Reilly.

Not all the messages were positive. Some used McCain’s illness as a platform for a statement on health care. Many from the far-right to the far-left brought up controversies from McCain’s past and some even cheered the news of his diagnosis, with alt-right editor Richard Spencer calling McCain a “detestable man,” before going on to wish him ill.

But more have been like Trump, who said in a statement Wednesday that McCain “has always been a fighter” and he hopes the senator gets well soon.

While he has been recuperating in Arizona, McCain has not just been on the receiving end of messages.

He issued statements this week outlining his position on the health care debate and criticizing the Trump administration over reports that it may be ending a program that assists the Syrian opposition. He has continued his steady Twitter presence, putting out at least five tweets on Thursday alone, one of which included an acknowledgment of the support he has received.

“I greatly appreciate the outpouring of support,” McCain said in his tweet. “Unfortunately for my sparring partners in Congress, I’ll be back soon, so stand-by!”

Chong had some advice to help him along in his recovery.

“Fight on John McCain you have over come worse and google marijuana and cancer,” Chong tweeted. “Fight on war hero.”

Between cancer treatments, McCain maintains rigorous agenda
Sen. McCain diagnosed with brain tumor after clot is removed
Despite cancer diagnosis, McCain says, ‘I’ll be back soon’
McCain gets visits from friends, family after surgery
McCain completes round of radiation, chemo