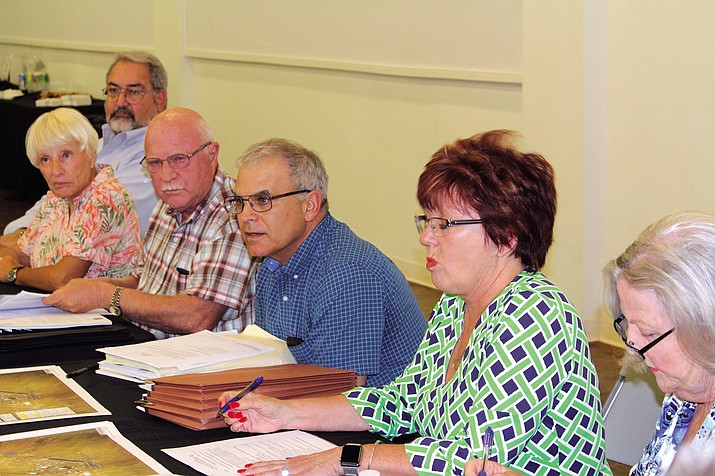 KINGMAN – There were more questions than answers at Thursday’s special “work session” between Kingman City Council and the Kingman Airport Authority, mostly directed toward airport officials who were on the hot seat explaining why there hasn’t been much economic development at the 4,100-acre airport and industrial park.

About 50 people attended the two-hour session held at Beale Celebrations and moderated by Bill Pupa, and they waited until the last half-hour for their three-minute comment period.

“Why has the Kingman airport been allowed to turn into – for better word – a junkyard?” asked a former aviator and airport manager. “It really surprised me when I came here and saw the condition of the airport.”

Another person mentioned several companies that have tried to relocate to Kingman Airport, and said “it was the most unfriendly airport to deal with.”

Paul Gaines, a member of the Kingman Airport users committee, said the problem is nobody is listening from the airport side. He said he’ll put an item on the board’s monthly agenda, and KAA Executive Director Dave French will pull it from the agenda.

“We have brought things up and they’ve been ignored. I’m not going to sit here and sugar-coat it,” Gaines said.

Tim Gerlach, president of the Experimental Aircraft Association’s local chapter, said there’s a lot of talk about things that could happen at the airport and how to pay for it. But it’s his understanding that the airport is well-funded through land sales, leases and rent, and aircraft storage.

“Why is the airport in such poor condition? The ramp areas … it’s been decades. This is serious and we need an airport board that takes it seriously,” Gerlach said.

City Councilman Travis Lingenfelter, who’s been leading the charge to bring the airport under control of the city, asked about 80 percent of land sales going toward airport operations.

French said that’s not right. The 80 percent figure is a “reinvestment obligation” from the FAA, he said. That’s the agreement made with the FAA in 2010.

But Lingenfelter said official documents with the city state that all proceeds from land sales be reinvested within a five-year period.

The 1,100-acre industrial park has about 150 acres left to sell, said Bob Riley, KAA economic development director. The last land sale was in 2015 to Star R Foam for expansion.

French gave an update on master plan accomplishments at the airport, including construction of Mohave Airport Road and Perimeter Road, reconstruction of Taxiway C and the purchase of 80 acres.

Some projects such as the glider taxiway didn’t get done. That’s because the airport has no gliders, Riley noted.

Master plan development is on a regulatory basis. The FAA, like many federal agencies, is “regulatory in nature,” Riley said.

FAA looks at aircraft counts and traffic projections, and air traffic was greater in 2006 than it is today, primarily due to the recession, cost of fuel and fewer people using their aircraft, Riley said. That affects FAA funding for the airport.

The master plan includes 80 acres with 4.5 million square feet of available space yet to be developed.

The ultimate objective of KAA is to get federal funding for a new terminal at the airport, Board President Krystal Burge said. The existing terminal would be used exclusively as a fire station. “Plans are on the shelf and waiting to go,” she said.