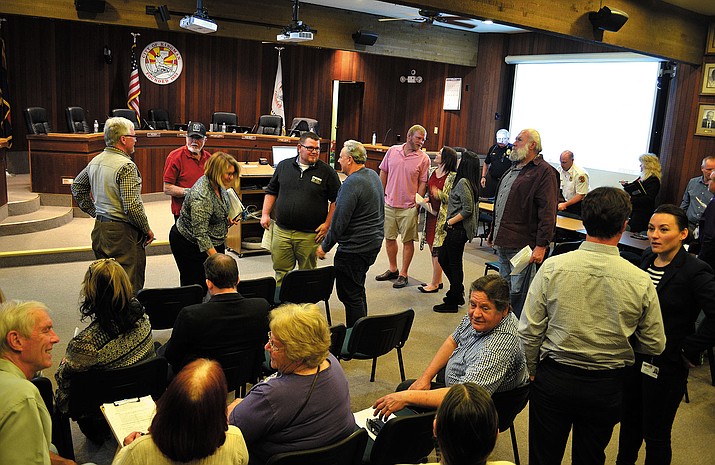 Correction: The day of the council was incorrectly reported originally. The City Council meets at 5:30 p.m. Tuesday at City Hall. The story below has been changed to reflect the correction.

KINGMAN — The Kingman City Council meets 5:30 p.m. Tuesday to discuss the tentative budget, city strategic plan and a text amendment to Ordinance No. 1829.

The tentative budget for Fiscal Year 2017-2018 had some recommended changes after discussions May 11 and 12. Additional modifications will be incorporated into the final budget, which is scheduled for adoption on June 20.

Councilmember Travis Lingenfelter also plans to discuss a preregistration fee for an Arizona Town Hall meeting as well as discuss having a workshop about alternative financing for capital projects. Lingenfelter has also requested a discussion reaffirming the City Council’s intent to have Arizona Town Hall, ED Strategic Planning Firm and City’s Economic Development Director moving forward as a cohesive unit rather than sequentially, as Lake Havasu City did for their Vision 20/20, and in order to avoid misalignment.

Mary Lou Galvan requested a text amendment to Subsection 25.4000 of Ordinance No. 1829 to allow banners honoring local active duty military personnel to be placed on city light poles for as long as the individual is serving in the military. The Planning and Zoning Commission held a public hearing on May 9, 2017 and voted 7-0 to recommend amending Subsection 25.110 Exceptions of the Sign Code to allow the proposed banners be excepted from being regulated through the Sign Code.

This request will be a public hearing for consideration.

Also expected will be an update from the council regarding water issues in the Kingman area.