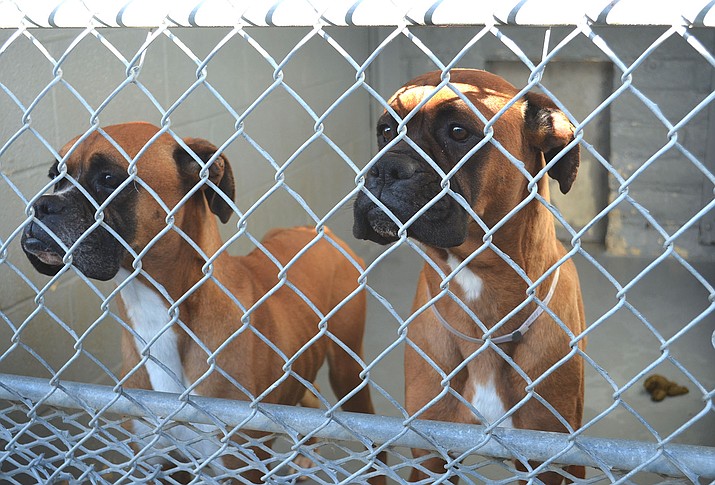 Dogs are interested in something at the Western Arizona Humane Society-managed Kingman animal shelter.

KINGMAN – Two potential sites for a new Kingman animal shelter and expansion of the current location were presented Monday to the Mohave County Board of Supervisors.

Top choices identified by the Citizens Animal Shelter Needs Assessment Committee are a 2.5-acre parcel at Neal-Butler Park and 24 acres of county-owned land west and north of the library on Beverly Avenue.

Another strong possibility is a 3-acre warehouse site near the County Administration Building, although it may conflict with long-range plans for the warehouse, said Gene Hepler, who spearheaded the committee.

The least favorable option is expanding and upgrading the current shelter at 950 Buchanan St., which is in such a state of disrepair that it would not be cost-effective to renovate, Hepler said.

The ceiling is dry-rotted and falling down, drainage is poor and expansion is limited to a quarter-acre private parcel for sale and 0.11 acre of city land, he said.

The animal shelter committee looked at a 2007 study by Jackson & Ryan consulting firm of Houston assessing the need for a new shelter in Kingman. That study projected that the number of animals taken in at the shelter would increase to 10,400 in 2015 as Kingman’s population grew, but those projections never materialized. The animal shelter’s intake was 3,707 in 2015.

Sam Scarmardo, vice president of Western Arizona Humane Society, said it was evident from Monday’s workshop that a new animal shelter is not very high on the supervisors’ priority list. WAHS has a $260,000 contract from the county to operate the Kingman shelter.

The committee has been working for about a year to come up with the best site for a new shelter, he said. It should be central to the population, accessible from a major highway, invisible to traffic and conducive to barking dogs.

“It wasn’t advantageous to build at the old place,” Scarmardo said. “You’re throwing good money after bad. The Kingman shelter eventually is going to fall down. It’s constant band-aid and chewing gum holding it together.”

Supervisor Jean Bishop said she visited the Kingman shelter and found that the ceiling had been fixed.

He also mentioned the possibility of purchasing the Rising Star Kennel that’s for sale for about $770,000 in Bullhead City.