Catastrophe: Animal shelter didn’t expect to have 250 cats to board, let alone prepare for adoption 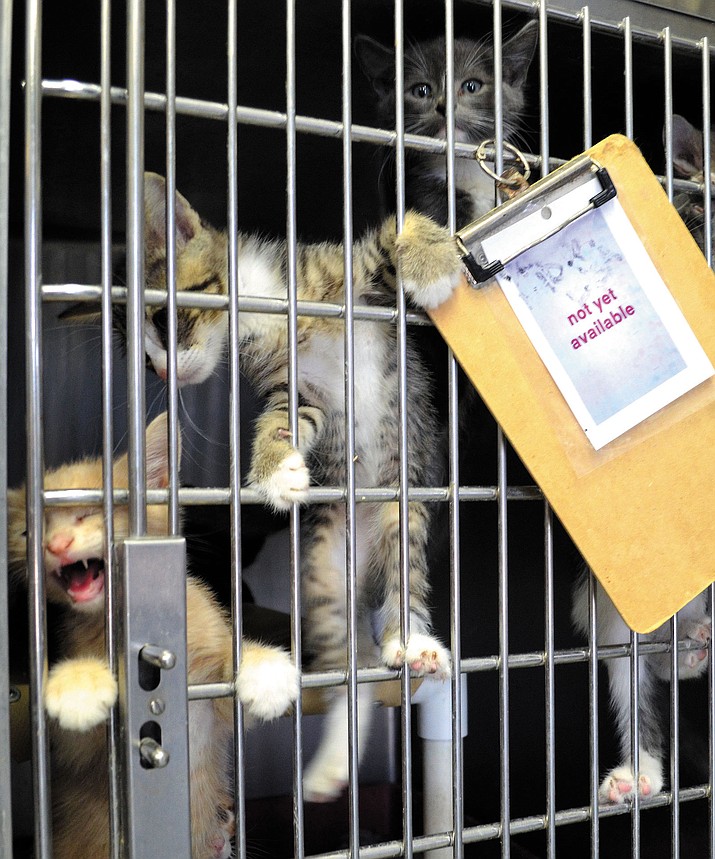 Kittens yowl and scream to be rescued.

A cat crisis is brewing in Kingman.

Western Arizona Humane Society Operations Manager Lisa Snyder said the shelter is in panic as people have dropped off nearly 250 cats in the last two months.

As of Tuesday, WAHS had 243 cats, and counting. All but 47 are kittens. There are 120 cats at the shelter; 27 are feral cats in the working cat program; 85 are in foster care of volunteers and employees; and 11 are at the Kingman and Bullhead City PetSmart stores.

Snyder said the influx is a yearly event. It started in April and exploded in May. She said the barrage has never been this overwhelming, and they’ve never received so many unadoptable kittens.

“We did this to ourselves, sort of,” she said. “This is what happens, unfortunately, when you adopt a no-kill ethic.”

Those kittens are a problem. Many of them are so young, they still have to be bottle fed. Others aren’t old enough to be spayed or neutered or receive the proper vaccinations, all of which WAHS does before putting their animals up for adoption. WAHS waits until the male kittens are two pounds and female kittens three pounds before they’re fixed.

“They’re coming in by the armload,” she said.

One person brought a litter in a coffee pot box. Another batch came in a shopping cart.

Unlike for dogs, WAHS doesn’t receive funds from the county or city to cover cat expenses. It costs the shelter between $150 and $200 per cat for spay/neuter ($50 on average) and vaccinations (about $10 per shot). That doesn’t include all the cat food, formula and antibiotics when the shelter gets overcrowded and disease starts to spread.

“You never know what these cats come in here with,” Snyder said.

WAHS charges a $65 adoption fee and a $10 drop off fee for a litter up to five kittens.

“You wouldn’t believe how many people complain about that,” she said. “We have to recoup the money somehow.”

Snyder networks with shelters in Phoenix and Las Vegas, as well as local animal sanctuaries, but almost all of them are full.

For the Luv of Paws is maxed out.

“We’re pretty much at the 120 cats we are permitted,” said owner Cherie DaLynn.

She said other rescues like Gypsy Cats are phasing out due to the age of the owner and the RUFFF animal shelter in Golden Valley being shut down has narrowed the availability of sanctuaries for the cats.

DaLynn added that volunteer help is extremely hard to come by and there are too many cats that aren’t fixed.

“Education is the key. People really need to spay and neuter,” she said. “The general public doesn’t deal with this everyday like we do. I don’t know what else all of us can do to get the word out.”

DaLynn called on help from county government to find a solution.

“If we had a decent animal shelter with proper facilities for housing the cats, the shelter wouldn’t be so overwhelmed,” she said. “This has been an ongoing issue with the county.”

Help Animals Lives Today in Kingman won’t take in any cats because of the lack of volunteers.

HALT founder Lotti Benker said that since there are no volunteers, the cats aren’t socialized with humans.

“Unfortunately that makes them unadoptable,” she said. “I wish there were more people in Kingman to help us.”

Benker pointed out the obvious solution.

“The only thing that’s going to fix this is spay and neuter,” she said. “That’s been our motto for 17 years.”

Snyder said most of the cats that come in are from pockets of Kingman, mostly from areas saturated with mobile homes.

“The cats get under the trailers and have kittens,” she said.

WAHS has a trap and release program meant to curtail the feral population. They provide the traps for a refundable $25 deposit and $1.50 daily fee. Residents can trap the cat and bring it to the shelter. For a $10 deposit, WAHS will fix and vaccinate the animal. WAHS can keep the cat and the deposit or the resident can take the cat back along with their $10.

Snyder said people aren’t taking advantage of the program or they’re bringing in the kittens and not the adults, “Which defeats the whole purpose (of the program).”

None of the cats have been euthanized, yet.

“We’re getting close,” Snyder said. “We have special fees for adoption, but the kittens won’t be adoptable for about another four to six weeks.”

WAHS has always practiced a no-kill ethic. They’ll only euthanize animals if it’s absolutely necessary – never to make space. Last year at this time, they were euthanizing nearly 50 percent of the cats coming in. Since clamping on the no-kill ethic in the last six months, they’ve saved 80 percent of the felines.

“I don’t want to decide who stays and who goes,” Snyder said. “It’s not a decision I like to make.”