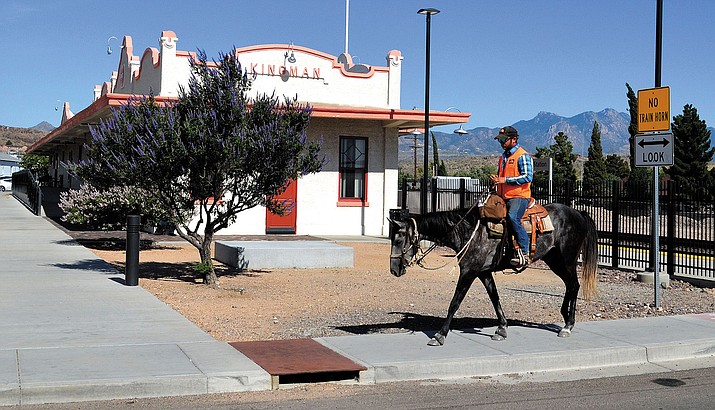 Romberger and Gus reach the end of their (current) Arizona ride at the Kingman Railroad Depot.

KINGMAN – Cliff Romberger served in Vietnam from 1970 to 1971 and died in 2015 of a brain disease as a result of exposure to Agent Orange.

He was a lifelong horseman and never fulfilled his last bucket list item: to ride coast to coast on horseback. His son is now fulfilling that wish.

Colt Romberger, a U.S. Air Force and Iraq War veteran, is carrying his father’s ashes as part of Expedition Orange, a 3,000-mile ride to raise awareness and honor Vietnam veterans suffering from Agent Orange exposure. He’s also on a mission to get other Vietnam War veterans, and their families, to open up about how Agent Orange has affected their lives.

He made a stop in Kingman Friday before taking a three-week break for rest and repairs.

“Before my dad died he said ‘More for them, less for me,’” Romberger said. “I think what he meant by that was to raise awareness for everyone.”

He started the trek May 1 on Sunset Boulevard and the Pacific Coast Highway north of Santa Monica, California. He hooked up on Route 66 in Pasadena and followed the Mother Road all the way to the California and Nevada side of U.S. Highway 95, ultimately riding into Laughlin and on through Golden Valley.

Romberger, road foreman Kenny Reichel and Gus, his Steel Dust-bred quarter horse, stayed the night at the Mohave County Fairgrounds after a grueling three-day trek from Bullhead City to Golden Valley through the Black Mountains.

“I had to lead (Gus) 2 miles up a hill,” Romberger said. “I was literally holding him with one hand and climbing up a hill with the other.”

He uses the roads as a bearing only and rides either close to the roads or takes back trails. He’s accompanied by Reichel, his friend and mentor, who follows in truck and trailer.

“Colt’s dad was my best friend,” Reichel said, pointing to Romberger. “I watched this little guy grow up. When he asked if I wanted to join the ride, I said, ‘You bet!’”

Since the trails sometimes veer far enough off for the two to not be in sight of each other, they try to stay in touch via cellphone, and do a commo (communications) check every few hours.

“If (Reichel) hasn’t heard from me in about five hours, he knows it’s a ‘man-down’ situation,” Romberger said.

Though the trip started May 1, Romberger has no idea when it will end. He said he had talked to other riders who have made it in six months and is shooting for the same goal, but he’s already far behind.

He can ride up to 15 miles in an eight-hour day on flat, dry surface, but the mountains and hills slow the horse down. He said it took him six hours to ride 7 miles one day.

Expedition Orange is funded through a nonprofit charitable veteran’s organization. The website, www.expeditionorange.org, has links for donations and, more importantly, to share stories.

“It’s sort of a ‘Make-A-Wish’ type foundation to help vets,” Romberger said. “This helps give them the welcome home they didn’t get 40 years ago.”

He plans to collect the stories and eventually publish a book to present to the U.S. Congress.

“We’ll have succeeded if we get just one congressman’s ear,” Romberger said. “We want them to know that these are real people with real problems.”

Agent Orange was an herbicide used by the U.S. military during the Vietnam War to defoliate the thick jungles. Veterans who were exposed have suffered from higher cases of cancer, nerve, skin and respiratory disorders than their counterparts who weren’t exposed. They’ve also fought with the Department of Veterans Affairs and their representatives in congress for decades over the recognition, proper treatment and benefits regarding exposure and effects of the chemical.

“Agent Orange can get passed down generation to generation,” Reichel said.

According to Jerry Ambrose Veterans Council president Pat Farrell, there are approximately 27,000 veterans in Mohave County, and he estimates about half of those are Vietnam Veterans. He’s also a member of the Vietnam Veterans of America Mohave County Chapter 975, which holds a town hall meeting once a year regarding Agent Orange. They bring in experts and resources for people to file for benefits. Farrell doesn’t yet have a 2017 town hall date set, but said those with questions can contact him at 928-716-3001.

While Romberger is the rider, Gus steals the show.

When children see the horse, Romberger takes the opportunity to bring awareness to many who aren’t even aware of the Vietnam War. He’s already talked to teachers who have yet to bring it into their curriculum.

“It’s better to get it in their heads when (the children) are eight than when they’re 18,” he said.

Romberger knows the VA recognizes Agent Orange exposure as a health problem, but said their priorities can shift depending on newly arising crisis. He wants to make sure Vietnam veterans don’t fall off their radar.

“I’m not bashing the VA,” he said. “They have bosses and those bosses tend to fix the squeaky wheel. Right now that wheel is Iraq and Afghanistan War veterans.”

In the meantime, the Expedition Orange team has started a “bandana challenge.” They’re asking people to support the cause by purchasing orange bandanas and signing them with a personal message. Romberger and his team will deliver them to Vietnam veterans around the country.

“This affects them on a more intimate and personal level,” he said.

Romberger and Gus rode about 13 miles Friday. He had to backtrack a few times after running into too many gates and fences. Both horse and human were guzzling down some much needed cool water at the Kingman Railroad Depot, their stopping point for this portion of the Arizona ride.

Romberger, Reichel and Gus had planned to visit the Kingman American Legion and Veterans of Foreign Wars Saturday before heading to Missouri for some R&R.

“It’s an honor to talk to the vets and listen to them tell their stories,” Romberger said.

“We just want these guys to open up,” said Reichel. “Hopefully Gus can help them do that.”

For more information, to track Romberger’s progress or donate, go to www.expedtionorange.org. You can track their progress on the Expedition Orange Facebook Page.