Livingston promises to end Common Core on her superindentent campaign 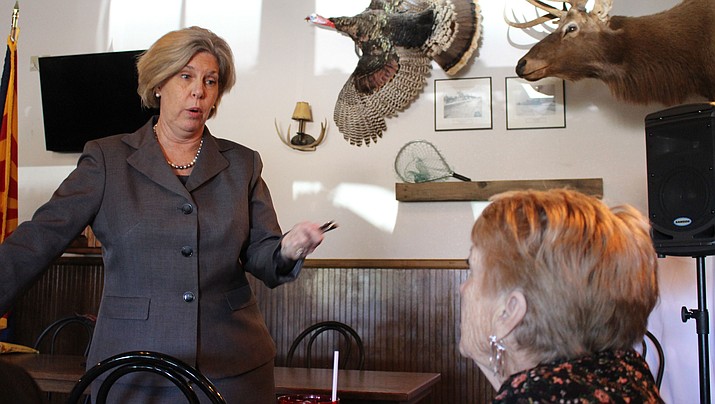 Those are a few of the topics Livingston discussed Monday as guest speaker at the Conservative Republican Club of Kingman’s annual lunch meeting at Dambar Steakhouse.

Livingston speaks from experience. She taught every K-12 grade except fifth in her 16-year education career, was former president of the Maricopa Community College Governing Board and former board member of the Peoria Unified School District.

“My passion has been to children without a doubt for my entire life,” she told about 40 people at the Republican club meeting.

Livingston picked up 220,000 votes without putting up signs and managed a $1.2 million budget at the community college. She’s been inside and outside of the classroom, and is confident she can bring changes to the public school system bureaucracy.

“Common Core is still in the classroom. It never went away,” she said. “It’s killing teachers. We’re becoming technicians of the trade and the kids are folding up and leaving.”

Common Core is all about how teachers score in testing of their students, all the way down to classroom textbooks, Livingston said. It’s time for teachers who understand the ABC’s of education to tell the state what kids really need in school.

“It’s like we’re manning our own ship and sinking quickly,” said Livingston, who hopes to challenge Diane Douglas for Arizona Superintendent of Public Instruction in 2018. “We need someone who can communicate with the governor and legislature so we can work together as a team. That’s a concept bureaucrats don’t understand and I don’t know why. Maybe they get too full of themselves.”

The biggest problem with Common Core is not the curriculum, but the learning gaps, Livingston explained.

The first thing she would do is walk into school on day one and take the Arizona merit test off the computer and put it on paper. It took three weeks to complete the test, and you could see it in the kids’ eyes, she said.

The second step is to work with state legislators to wipe out Common Core, Livingston said. It’s going to take three years of “baby steps” to get rid of Common Core, she said.

Livingston said administrators in Maricopa and Phoenix think they know everything, but they know nothing. They need to get into the rural communities and Indian reservations and listen to what the people are saying.

Livingston spent 12 years in Title 1 schools, or those with lower-income families, serving the neediest of students in the state.

More students today are turning to online education. Could a day come when we won’t need traditional schools?

“Online learning has its place. I’m not the biggest fan,” Livingston said. “They become like diploma mills, not all of them, and it’s a great profit center for some.”

She doesn’t know what schools are going to look like in the future, but she does know that her son wanted to be part of the sports, Advanced Placement classes and socialization that comes with a school campus.