Weekend Trips of a lifetime on Lake Mead 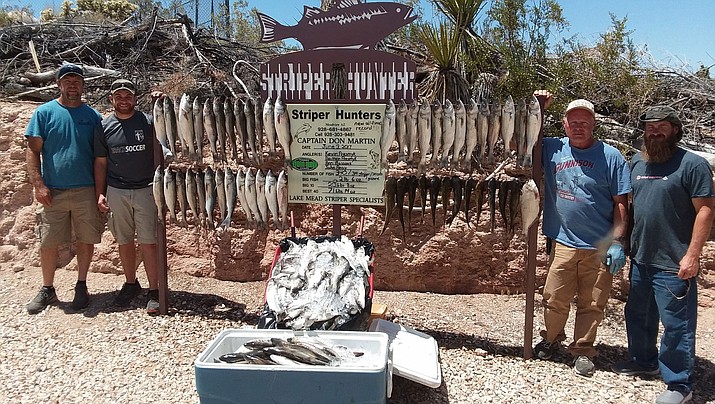 As a professional fishing guide on Lake Mead for the past 10 years, and actively fishing there since 1972, I have had some very special fishing trips.

Stripers are the main fish that my clients and I try for on Mead, as they are the most plentiful sport fish in the lake. The estimates are from 2-7 million stripers inhabit this Colorado River waterway.

I fish for stripers mostly at night for two reasons. Not many anglers know that stripers, which are really a salt water fish, have the most rods and cones in their eyes. They are by design, nighttime hunters.

The second reason I fish at night is that it is hot and dry in the Arizona desert, and temperatures on the lake during a summer day often reach as high as 122 degrees.

Over the years I’ve put together a fishing operation where I take anglers out at night and we fish till daylight. We normally catch between 75 and 125 fish per night, depending on how long we fish and how many anglers are in my boat.

I operate a 21-foot jet boat that is shallow draft and wide, and is an extremely stable fishing platform.

I’ve set up my boat with 12 volt modified shop lights on the four corners, and I exclusively use two Hydroglow submersible fishing lights, green in color, to attract the two types of plankton in the lake. This plankton is the top of the food chain for tiny fish such as threadfin shad and gizzard shad which are the No. 1 food for stripers.

I am also a big believer in using chum - a mixture of different substances that I believe attracts stripers, which by the way, have the best sense of smell of any other fish except catfish, in Lake Mead.

In the past, using all of this technology and chum, that I affectionately call “Don’s Secret Sauce,” fishing with four anglers, we’ve brought in as many as 234 fish, which include stripers and catfish.

That was the record until last weekend, when I was part of two incredible fishing trips.

It started on Friday night when I went out with a group of four anglers from the east valley area near Phoenix.

I would be fishing with Chris Cobb and his friends Tino, Miguel and Cesar Mata.

We fished in an area that I call Schleeter Rock, an outcrop of rock that is located about halfway in Virgin Canyon. The area is located between South Cove and Temple Bar.

This spot, like many on Lake Mead, holds lots and lots of fish. Electronic fish finders revealed that there are two long rocky ridges that extend at a 45 degree angle from the front of the rock. In between the ridges is a fairly deep basin where the fish like to congregate.

Last summer my anglers and I pulled in over 2,500 stripers and a fair number of channel catfish from that same spot.

This group has fished with me two previous times.

The first trip we brought back 185 fish, and last year we only brought in 85, but we had some serious weight. Our best 40 stripers weighed in at just over 73 lbs.

The moon was about half and the wind was light. Those are two factors that can, and often do, influence the success of your night when fishing for stripers.

I prefer the dark of the moon and wind from 5-10 miles per hour. Calm nights just don’t seem to produce.

I had previously fished Schleeter Rock this year and had trips that produced from 85 to 140 fish. But when we pulled up to the spot late on Friday night, I had no idea what we were going to experience.

When we arrived in the area, the first order of business was to put out some chum.

Then we started fishing.

The action started almost immediately. But what we caught were what I call “peanuts,” small stripers from 7-10 inches long.

By the way I believe these are the best size to eat. The meat is firm and they make fabulous fish tacos.

As the night wore on, the size of the fish also increased.

The next morning it took us well over two hours to process those fish. We utilized every fish we caught. The group took home over 60 pounds of filets. They also set the bar for our in-house fishing contests for this summer. Their best 10 fish weighed 20 lbs. 14 oz. and best 40 stripers weighed 69 lbs. 6 oz.. They also caught a striper that weighed 3 lbs. 2 ounces, which put them in the lead in that division, as well as the Big 10 and Best 40.

On Saturday night I had another group of anglers come in. These guys were from the Camp Verde area and included Kevin Presmyk and his son Damon, Ben Bassous and John Reay. These guys were serious anglers.

We didn’t know it at the time, but before their trip was over, they would set the all-time record for the number of fish that were caught in an overnight trip.

After dinner at the fishing cabin in Meadview, we headed down to the lake. I had a feeling it was going to be a good night so I brought along some extra ice chests with ice. We always put our fish directly on ice. This keeps them cold and the meat firm.

Before we started fishing we made three passes up and down the front of Schleeter Rock putting out some “serious” chum.

With lots of chum in the water, we set up.

The pattern was just like the night before. We started catching “peanuts,” and then the larger fish arrived.

But this night it was non-stop action. And the guys were catching some solid fish.

We went through about 8 lbs. of cut up anchovies, some squid, shrimp and even two containers of nightcrawlers before we ran out of bait and space in the coolers to keep fish.

Every ice chest in the boat was full as we headed in after just 7 hours on the water.

The boys estimated we had 250 fish, but I wasn’t sure.

Back at the house we started counting and weighing the catch.

The final tally was incredible!

That was over 100 more than we had ever caught on a night time trip at Lake Mead.

They barely missed taking over the top spot in the best 10 division, weighing in 20 lbs. 8 oz. missing the mark set the night before by just 8 ounces.

It took the five of us working together just over 5 1/2 hours to process the fish. And the end result was the guys taking home right at 100 pounds of filets. Rest assured all the fish will be utilized by these anglers, friends and family.

Hard to believe that in two nights of fishing the boat had caught a total of 567 fish.

There is obviously not a shortage of stripers there, and according to the Arizona Game & Fish Department, removing these fish actually helps the fishery.

I really don’t expect to see these kinds of numbers again this summer. But when the moon starts getting darker, I’ll be out there at night with others seeking out the hard fighting, good eating stripers from Lake Mead.