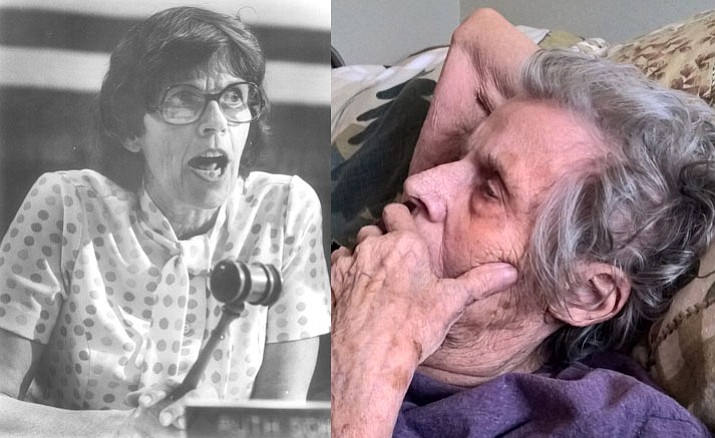 Ruth died on Wednesday, May 31, 2017, at home after a prolonged decline in health. A Leo to her core, she was never content to waste away without a fight. She found the gratuitous suffering that she experienced while dying to be abusive and completely inconsistent with the notion of a benevolent divinity. She left looking forward to reincarnating back into a better world and was eager to start making the necessary changes.

A clear thinking and deeply principled woman, she will continue to live on in the hearts and minds of those who knew her. With the strength and courage to stand her ground and voice her concerns whenever the world around her failed to best serve the interests of all involved, regardless of external circumstances, she served as a role model for those with the character necessary to follow her example.

She was married to Phillip D. Schaffer, her husband, for one week short of 73 years. They met while attending Fairview High School in Dayton, Ohio and married shortly after graduating in 1943. Both only children, together they had a full family of five: Harwood David Schaffer (Joanne) of Knoxville, Tennessee, Jack Thomas Schaffer of Kingman, Arizona, Mary Ann Leonard of Tacoma, Washington, Kay Ellen Schaffer of Centerville, Ohio, and Grace Holly Myers (Joseph) of New Carlisle, Ohio. In addition, they also helped raise Wyatt Waite of Dayton, Ohio after the passing of his mother. Depending on who is doing the counting, they had at least nine grandchildren and more great-grandchildren spread across the country.

Her approach to mothering is best captured by the words from Merle Travis’s song “Sixteen Tons,” made popular by Tennessee Ernie Ford: “I was raised in the canebrake by an ol’ mama lion. Cain’t no-a high-toned woman make me walk the line.”

Always searching for greater challenges, she successfully ran for city council and later became the Mayor of New Carlisle, Ohio, where she then lived.

Whether you agreed or disagreed with her, you always knew where she stood and how she would act – always as she felt was best for those she selflessly served. A natural politician in the best sense of the calling, she always sought to improve her understanding and capabilities.

Upon retiring in 1986, Ruth and Phil moved to Kingman, Arizona. She had more interests than the time to pursue them allowed, but she never let that hold her back. She opened and ran a ceramic shop for several years. She loved going to auctions, as much for the people as for the sales themselves. She was an avid reader and was particularly interested in biographies and historical writing.

Perhaps she is best described by the words of a friend: “She was a hoot, and I loved her dearly.”

Not one for polite, social conformity at the expense of honesty and transparency, there will be no public services, only the private memorials of each person’s thoughts as they remember her. Simple acts of kindness suffice.