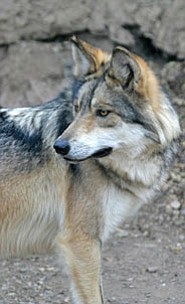 The Arizona Game and Fish Department was monitoring 58 endangered Mexican wolves, but lost contact with the Baldy Pack in May.

KINGMAN – The Arizona Game and Fish Department was monitoring 58 endangered Mexican wolves wearing radio collars at the end of May, the department reported in its latest update.

The overall population of the wolves in the wild in Arizona and New Mexico was 113 at the end of 2016.

Annual surveys are conducted by field teams in the winter when the population has the least amount of natural fluctuation. The spring population increases dramatically with the birth of new pups and declines throughout the summer and fall as mortality is particularly high on young pups.

Wolves with functioning radio collars are listed by studbook number in the pack updates. They’re given an identification number preceded by capital M (male) or F (female) for adult wolves and lowercase letters for wolves younger than 24 months.

Arizona Game and Fish was tracking 10 different packs of wolves in May. The Baldy Pack was not located during the month. It has been more than three months since the Baldy Pack was located and their fate is now considered unknown.

A wolf “pack” is defined as two or more wolves covering an established territory. If one of the two alpha wolves dies, the remaining alpha wolf, regardless of pack size, retains the pack status. Mexican wolf packs in the Arizona Game and Fish update have at least one wolf wearing a radio telemetry collar.

One female wolf from the Diamond pack was found dead in Arizona, and there were five confirmed wolf attacks on livestock and no nuisance reports. On May 22, Wildlife Services determined two dead calves in Apache County were wolf kills, and another calf was killed on May 30.