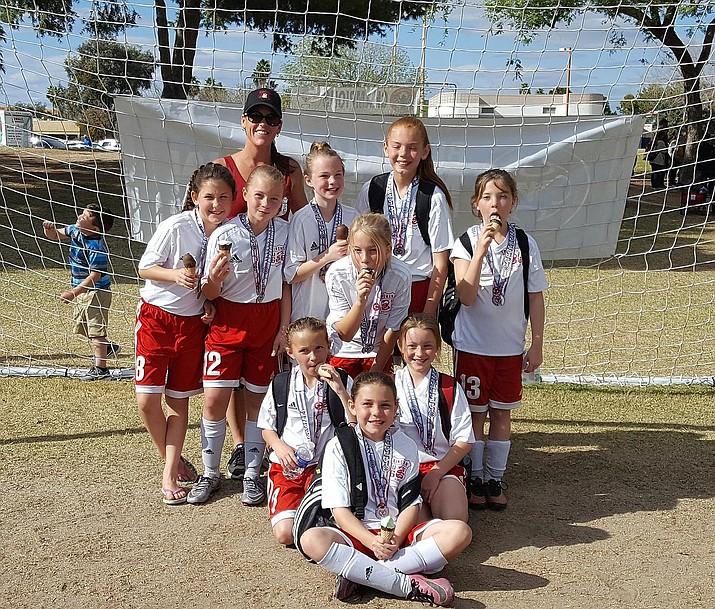 Coming off their championship win two weeks ago at the Desert Classic, the girls looked forward to another fun weekend of soccer.

Kingman coach Kimbra Bratley said “I knew going into this tournament that if things went the way we wanted them to go, our girls would probably be going up against the 29th ranked team in the state, DFSC 06 Desert Elite Red, in a championship game. Before we could do that we had to win our bracket in our Saturday games.”

Kingman’s first game was against AZ Arsenal 06 Premier Black. The Arsenal team had been hit and miss this year. Kingman came out very strong in the first half scoring two goals. Sophie Fottrel, right wing, was on fire finding the back of the net with two shots from near the 18-yard line. Madison Brisco also outran the Arsenal sweeper and punched the ball into the side of the goal.

Arsenal made some adjustments in the second half moving some of their bigger, stronger girls to the defense. This slowed Kingman down, and on the other end of the field, Arsenal found the back of the net three times, but Kingman came out on top, 4-3.

“You could tell our girls were slowing down. They were getting tired,” Bratley said. “We had two girls out this weekend. Only having one sub was affecting the quickness and aggressiveness of our play. It was like we were playing our second game in slow motion. We just didn’t have the spark.”

In spite of this, Kingman went on to win against 49th-ranked Scottsdale Soccer 06 Blackhawks, 2-1.

Sunday play was Championship Day. To get there Kingman needed to defeat the second- place team in the other bracket, Las Vegas Revelation. Kingman easily prevailed, 3-0.

“The Saturday games did not go exactly as planned but we ended up where I wanted to be, which was facing DFSC in a championship game.” Bratley said. “DFSC was winning big in the other bracket. After three games they had not given up a single goal. It was DFSC 12, their opponents 0.”

Unfortunately, Kingman picked up in the championship game where they left off Saturday.

“We just were not ready for the quick and aggressive play of DFSC team,” Bratley said.

DFSC came out and scored two goals against Kingman in the first ten minutes of play.

“It’s games like these that build a team’s character,” Bratley said. “Teams in our situation can either give up or they can bear down and push through to the finish line no matter what the score is.”

Kingman did not give up. Maddie Brisco once again put the ball past the goalie to narrow the lead, 3-1. With less than 5 minutes of play, Berlynn Bratley scored on an assist via a corner kick by Sophie Fottrell. When the dust had settled, the score was DFSC 4, Kingman 2.

“I’m so proud of these girls. We scored two goals on a team that had not been scored on the entire tournament,” Bratley said. “Our girls did not give up and earned the respect of the DFSC team. Iron sharpens iron and our girls were sharpened this weekend.”

Currently the Kingman G06 team is ranked 31st in Arizona with a win percentage of .667 and a record of 12-1-5. National rankings can be found on www.gotsoccer.com.

Kingman Soccer Club will be traveling with five teams to Phoenix to play in the Legacy Ostrich Festival March 12-13.