The high cost of repealing the Affordable Care Act, aka Obamacare 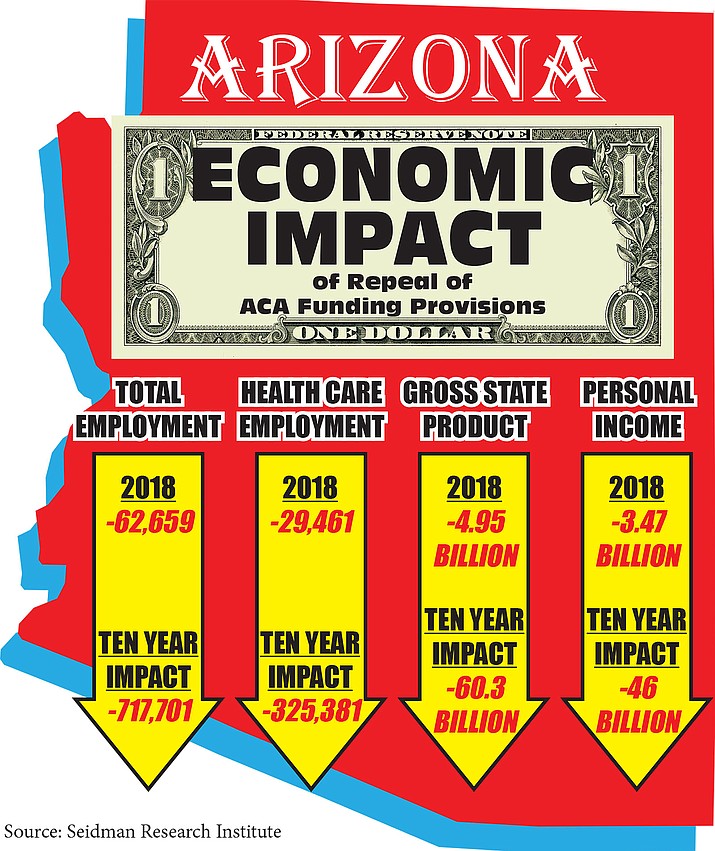 The popular and successful nursing program at Mohave Community College could be impacted if predictions of dire economic consequences following the repeal of the Affordable Care Act prove accurate.

Experts warn a ‘health care recession’ in the billions of dollars will hit Arizona if the Affordable Care Act goes away. Many citizens of the Kingman area, Kingman Regional Medical Center and the local healthcare support industry would be affected.

A report from Arizona State University warns of a “health care recession” with the loss of more than 62,000 jobs in 2018 and more than 700,000 jobs over the next 10 years should the Affordable Care Act be repealed.

The report quantifies the economic fallout from the repeal of certain funding provisions of the Affordable Care Act, or Obamacare, estimating a loss of nearly $5 billion in gross state product, and a drop of nearly $3.5 billion in personal income.

President Donald Trump signed an executive order in his first days in office to begin the process of repealing the act. Deliberations over the repeal are under way in Congress.

The economic study, commissioned by Children’s Action Alliance of Arizona, was completed in January by ASU’s W.P. Carey School of Business using a model from Seidman Research Institute.

“We have been warning our elected leaders about the devastating impact that repeal of the Affordable Care Act would have on the health and well-being of Arizona’s children and families,” Dana Wolf Naimark, president and chief executive officer of Children’s Action Alliance, said in a statement.

It would be particularly devastating in rural areas such as Mohave County, where Kingman Regional Medical Center is the largest employer with more than 1,900 employees and a payroll that tops $130 million.

The effect on the local hospital and its health care providers would be “significant” if the ACA is repealed without replacement or reinstatement of funding, somewhere in the neighborhood of $8 million a year, said Teri Williams, spokeswoman for KRMC.

“Kingman has a significant number of community members who receive insurance because of the ACA and would lose health insurance coverage without the economic means to purchase it,” Williams said.

“This means many would simply access their care through the emergency room and KRMC’s uncompensated care levels would increase significantly.”

Williams said KRMC has not reduced its workforce in anticipation of the repeal. The hospital has taken several cost-reduction measures, most of them focused on renegotiating contracts for services and supplies, as well as labor expenses in non-patient care areas, she said.

“If the ACA was repealed without some type of replacement, we would most likely have the difficult decision to reduce staff even in direct patient care areas,” the hospital spokeswoman said.

KRMC would also have to consider eliminating subsidized services that are economically unsustainable such as Hospice Home, support of senior services, community education and health promotion.

Following a national pattern, health care is the largest job sector in Arizona as measured by nonfarm payroll employment, accounting for 15 percent of private jobs.

KRMC has been a major economic driver to Kingman over the past decade, adding over 800 new jobs to its payroll. Experts estimate these jobs indirectly add another two jobs to the local economy.

For the past two decades, well before the ACA was passed in 2010, health care has been one of the most dynamic components of Arizona’s economy, the ASU report said. Since 1995, one out of every five new payroll jobs came in the health care sector.

During the Great Recession, Arizona lost more than 300,000 jobs, yet the health care employment continued to grow, ranking fourth in the nation in growth rate.

“Health care is the most dynamic sector of Arizona’s economy,” said Lee McPheters, research professor of economics at W.P. Carey School of Business. “Our health care sector was growing and adding jobs even during the Great Recession.”

McPheters’ analysis indicates that repealing funding provisions of ACA will bring about a “health care recession,” with 62,659 jobs lost in 2018, including 29,461 in medical fields.

Funding cuts would be first felt in health care, reducing employment and incomes of health care workers. Because of the interconnected nature of the Arizona economy, other sectors would experience job losses related to the funding cuts as well, McPheters said.

With a reduction in funding, health care firms would have to cut back on purchases from suppliers or cancel plans for new construction. Medical workers who lost their jobs would spend less on retail goods and services. As economic activity declines, gross state product and personal income would also decline, McPheters said.

Obamacare: Whatever happens, the local economy will be impacted.
Economist: Arizona economy on track for solid 2017 growth
Arizona jobs outlook is optimistic
Graham-Cassidy bill not going to a vote
Letter | Calling all Americans: About ACA, socialism and Social Security