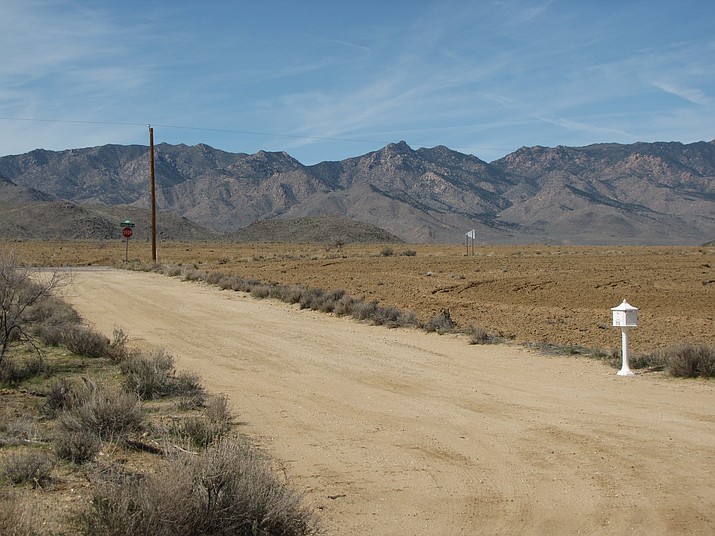 KINGMAN – For the first time since moving here five years ago, Roberta Byington complained to the Mohave County Board of Supervisors about dust and noise from the farming going on next to her property north of town off Stockton Hill Road.

The 24-hour farming operation managed by LKH Farming is an “atrocity,” Byington said. A large swath of land has been tilled to within 15 feet of her mailbox, creating a health hazard with dust erosion, crop-dusting and noise from the farm equipment, she claims.

Byington said it’s been “rumored” that the land was turned to make it more attractive to potential buyers, and that there is no actual plan or scheduled date for planting crops.

“We need action,” Byington told supervisors during a public comment period on Feb. 21. “When do they intend to plant? We have the monsoons coming. We need some help out here. We don’t know what else to say to you.”

Gary Watson, chairman of the board, said the county contacted the Arizona Department of Environmental Quality.

“This really is a state issue concerning the farms,” Watson said. “The state has control of water issues, as well as environmental issues.”

Tim Franquist, air quality division manager for ADEQ, said an inspector, Emily Bonanni, went to Mile Marker 23 on Stockton Hill Road on March 7 and didn’t see any dust. No deficiencies were noted during the inspection, and no ADEQ action will result.

The inspector met with Danny Carter, on-site farm manager for Stockton Hill Farms, and asked about the land clearing along Stockton Hill Road.

Carter explained that the area was cleared in January to coincide with the weather forecast for rain. After the field work was done, the area received rain more than once and the soil has not been disturbed since.

Bonanni went to other parts of the farm to observe soil conditions, and found the land on the east side of Stockton Hill Road appeared to have a crust on top of the soil. The only dust she observed was from vehicles and farm equipment traveling on some of the farm roads.

When plans are finalized as to what crop will be planted, irrigation will be readily available, Carter told the inspector.

Franquist said new farmers need to be educated on techniques to stabilize the land until they’re ready to plant, including irrigation, chemical stabilizers, tilling smaller parcels and vegetation cover.

“This is an issue statewide and typically it’s new farmers,” Franquist said Friday in an interview from Phoenix. “We’ve been working on a multi-agency dust action team. This is the kind of activity that would be addressed.”

There does seem to be a “disconnect” between absentee land owners and farm managers, Franquist said. They’re both responsible for protecting the community from fugitive dust.

Byington went to LKH Farming and spoke with operations manager Larry Hancock, whom she just happened to catch in the office that day, but “he wasn’t very pleasant.”

The Daily Miner contacted LKH Farming in Ehrenberg, but was told that Hancock does not own the land. It’s owned by Stockton Hill Farms and Red Lake Ventures LLC, a hedge fund that acquired the majority interest in the farm from Las Vegas developer Jim Rhodes.

Repeated calls to Nick Schupbach, a partner in the Connecticut-based hedge fund, were not returned by deadline.

“I’m no engineer, by far, but like I say, they’re within feet of our mailbox. They just tilled it with no planting,” Byington said. “Is anyone else concerned about this atrocity, or are we going to be left out here to dry up?”

Byington and her fiancé, Richard Swineford, purchased their 55-acre property long before the farms came along and stirred up dust clouds that have become a major concern for residents of Valle Vista and the Red Lake area.

“We’re in a valley, surrounded by mountains. We used to sit on our porch and enjoy the Hualapai cliffs. We can’t do that anymore,” she said.

Stockton Hill Farms was the source of about 50 dust complaints filed with the Arizona Department of Environmental Quality in early 2015.

Bob Saul, pension fund manager for the group that owns Stockton Hill Farms, promised “transparency” from the group when he addressed the Mohave County Board of Supervisors in 2015 after buying out Rhodes.

“We saw this project as very exciting, the most exciting farmland project in the nation,” he said. “We’re going to sell this property someday. It’s an investment. We’d love to hold it for 25 years, but we probably won’t.”

He said Stockton Hill Farms would have 12,000 acres planted by 2017, with water-intensive alfalfa as the primary crop. Much of the alfalfa would be shipped to dairy farmers in California, he added.