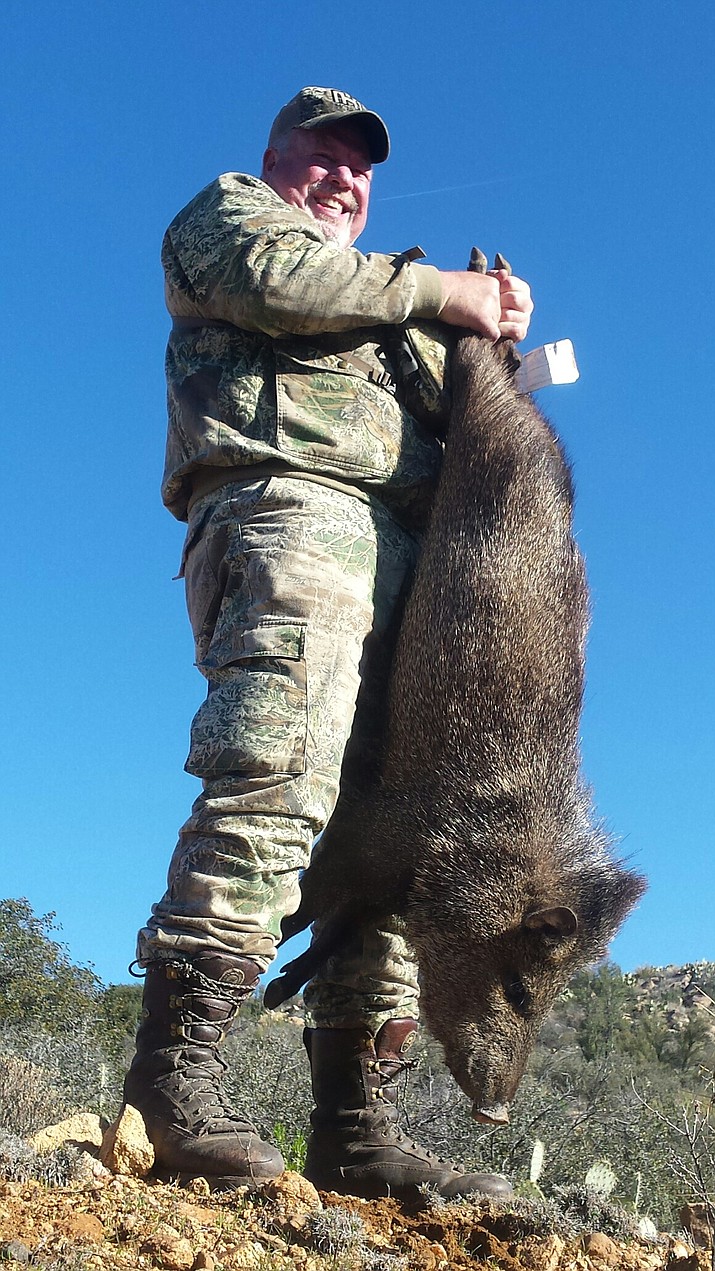 Rick Bayless of Pennsylvania bagged the top pig this year at 40 pounds, 8 ounces.

KINGMAN – Each year I sponsor a Big Pig contest during the javelina seasons in northwest Arizona. Hunters who have drawn archery, HAM (Handgun-Archery-Muzzleloader) or general rifle tags in Game Management Units 15A, 15B, 16A, 18A and 18B are eligible to enter this event.

Each javelina that is brought in must be field-dressed, and weighed on our common scale.

The reason I do this is to gather what I believe is needed information on the condition of the javelina that are brought in during the various hunts. Javelinas are the second-most hunted big game animals in Arizona, yet there is no organized conservation group that works for the betterment of this species. Other than surveys, the Arizona Game & Fish Department compiles little information on these animals.

There are conservation groups in Arizona for sheep, elk, deer, antelope and even quail, but no group that represents javelina.

I’ve been doing this for over 15 years and have discovered a couple of things about javelina taken in these local units.

First of all, the pigs taken here may be smaller than in other areas in the state.

According to my data, adult javelinas that have been taken in these units weigh an average of 33 pounds for sows, and 35 pounds for boars. Remember these are true weights, done on scales and are not someone’s guess.

From reports I’ve read on the Internet, javelina that weigh 60-plus pounds field-dressed are taken in some of the southern Arizona units.

Those hunters and guides claim these too are field-dressed weights, but I for one am not so sure. That is a HUGE difference in body weights of these animals. I know that food sources such as corn, maize and maybe even alfalfa can produce some larger body mass, I have a hard time believing there can be that much difference.

Here is another strange phenomenon about javelina that was taken this year in Region 3.

In the past 10 years in order to be in the top three places of our event, a hunter needed a javelina to weigh at least 40 pounds, field dressed. Our largest ever javelinas were taken by Ryan Chan, who took one that weighed 45 pounds, 5 ounces, and by Dan Reed, who took a pig that weighed 44-10. Both were taken in game management Unit 18B.

That pig was taken by Pennsylvania resident Rick Bayless, who took his pig on a general rifle hunt in Unit 18B.

Third-biggest pig this year was taken by Surprise resident Cory Erpelding, who took a boar that weighed 39-1. That pig was taken during a HAM hunt.

I can’t explain why the weights were down. The food supply looked good in these units and there was plenty of water out there. In some areas it looked the Garden of Eden, they were so green.

With the Spring 2017 hunting seasons now ended, the javelina will get a respite from hunting until November, when the fall juniors hunts start.

Javelina breed year around, so the herds can rebound quickly. Javelinas have a gestation period of around 145 days and most are born in June, July or August. They reach sexual maturity at 10 months.

However the redds, or young ones, are at the top of the food chain for almost all of the predators in areas where javelina live. Coyotes, bobcats, mountain lions, eagles, hawks and foxes are always on the lookout for young javelinas.

Javelinas are not pigs, but are in fact collared peccaries.

Those who excel at harvesting pigs year after year are generally good glassers who have figured out where these “Grey Ghosts of the Desert” live. Hunt success for archery hunters in Region 3 is around 30 percent. Those that participate in HAM hunts average 28-30 percent success, while rifle hunters average around 30 percent.

Spring juniors’ hunters have averaged as high as 50 percent in the past. This is due to those hunters being mentored by friends or family.

Javelinas live and die in an area that is just between one and one-and-a- half miles.

Figure out where those home ranges are, have some good binoculars and glassing skills, and the odds are that you see javelina.

For more information on javelina in Arizona, go to www.azgfd.com/hunting/species/biggame/javelina.

2015 javelina contest remains tight
Am I crying ‘wolf’ about the pig numbers in Unit 18B?
Good year for hunting in Mohave County
Javelina hunts popular with Arizona sportsmen
Rare success on a Unit 16A HAM hunt