Pain Management: It can be equally uncomfortable for patients and doctors 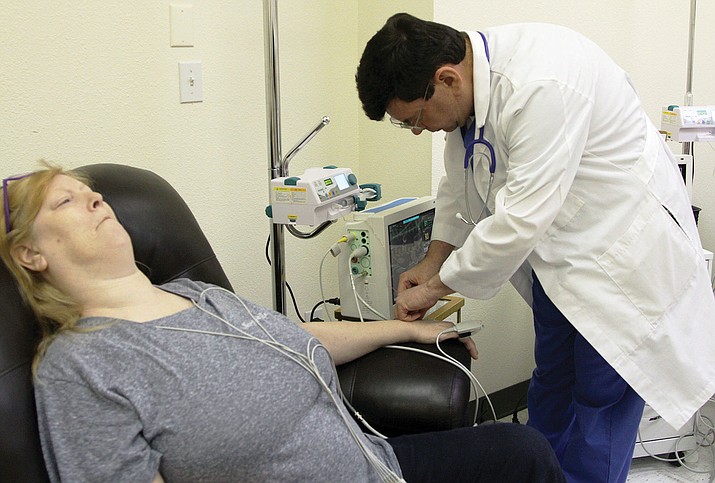 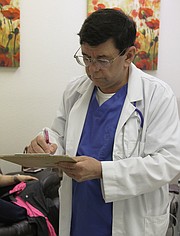 Dr. Michael Valpiani fills out a form at his office Friday.

Dr. Michael Valpiani is often forced to make tough judgment calls on whether his patients at Better Life pain management clinic really need their morphine, if they’re abusing the drug and at risk of overdosing, or if they’re selling it on the streets.

Valpiani has to play “20 Questions” with some of his patients to find out if they’re lying or not.

Like the woman who claimed she lost her purse containing her pain medications on the KART bus and asked for a refill.

Did she report the stolen purse to KART? No. Did she call police? No.

So Valpiani cut her off from her medicine.

“We have to make decisions every day,” the doctor said during an interview in his office at 3910 Stockton Hill Road. “You want to treat everyone with pain, but you can’t tell the good from the bad, so we’re going to give drugs to the wrong people.”

Pain is the most common reason for visiting a doctor’s office, and although there’s a concerted effort to objectively identify if someone has pain, there are no practical methods for determining if they actually do, Valpiani said. Even abnormality on imaging doesn’t necessarily mean they’re feeling pain.

One of Valpiani’s patients who did not want to give her name said the doctor has been using Ketamine to treat her chronic pain from a degenerative disk, arthritis and scoliosis.

She’s been able to do things she hasn’t done in 20 years like baking cookies for her family and walking longer distances.

“Now I am limited. I can’t run around the block, but it’s a lot better, I’m telling you,” the woman said after a two-hour treatment. “For 20 years, I’ve been in this shell. The pain part and the emotional part, he treats everything. He’s the best doctor. He listens and actually cares and he’s strict. He knows when people are trying to come to him for drugs.”

Valpiani calls it the good, the bad and the future of the opioid epidemic that’s blamed for 33,000 deaths in the United States last year.

Arizona has gone from the 16th-worst state for opioid overdose deaths to 9th-worst. They’re about evenly split between heroin and pain pills.

A lot of people complain that heroin and opioids shouldn’t be lumped together. However, according to the CDC, 80 percent of heroin users started on pain pills.

They’re both opiates, and there’s no difference between their functions, Valpiani said.

“It doesn’t matter which opiate you get hooked on, they all work. Some work better than others,” he said. “Heroin works better to get high. In that same vein, there are some indications that oxycodone is easier to get high on.”

The most abused opioid was hydrocodone because it was easiest to obtain when it was Class 3.

For every death, there are 10 to 20 overdoses, or roughly 300,000 to 600,000 overdoses a year. That’s costing over $15 billion a year for medical treatment in hospital, so the problem is not insignificant, Valpiani noted.

And it’s getting worse. Overdose deaths increased 14 percent in each of the last two years, according to the Centers for Disease Control. If that rate increases through the end of the decade, there will be over 60,000 deaths a year, Valpiani calculated.

“That’s more than all the people who died in Vietnam,” he said. “There probably aren’t many wars other than the Civil War and World War II where we lost that many people. And if you consider overdoses being similar to being maimed or injured, then we’ve reached the point where the war on opiates is the most deadly war in history.”

Mohave County had highest overdose deaths of people under age of 17.

“Yes, children are involved,” Valpiani stressed. “There are pain pills in our grade schools, in our high schools. There’s heroin in high schools and junior high schools. Teachers in Flagstaff have told me they know of fifth-graders, 12 year-olds, who are partying on pain pills. Where are all these pain pills coming from?”

According to CDC, almost all pain pills on the street come from doctors’ prescriptions. They go to patients who are not very careful with their drugs, or they’re deliberately passing them around, Valpiani said.

About 60 percent of people on pain pills have extra medications unsecured in house, probably in a medicine cabinet that can easily be accessed by children or visitors to the home. CDC found that 40 percent of people have no problem sharing them with family or friends who have pain or have issues.

State law has always required that doctors look into the reasons why patients need narcotics, and patients don’t like it.

“You have to ask lots of questions, things patients don’t want to talk about, like the issues going on in their lives over and over,” Valpiani said. “Again, patients simply want to come in and get their drugs and leave. After all, patients that are good want to be treated as good and patients selling drugs don’t want to be questioned about anything.”

WAFD | Doctor: About half in Mohave County who take pain meds abuse them
State of Emergency: Opioid overdoses get governor’s attention
WAFD | Initiation to heroin use among teens up 80 percent
Letter | Don’t forget the people who need pain medication
The politics of pain - another side of the opioid story