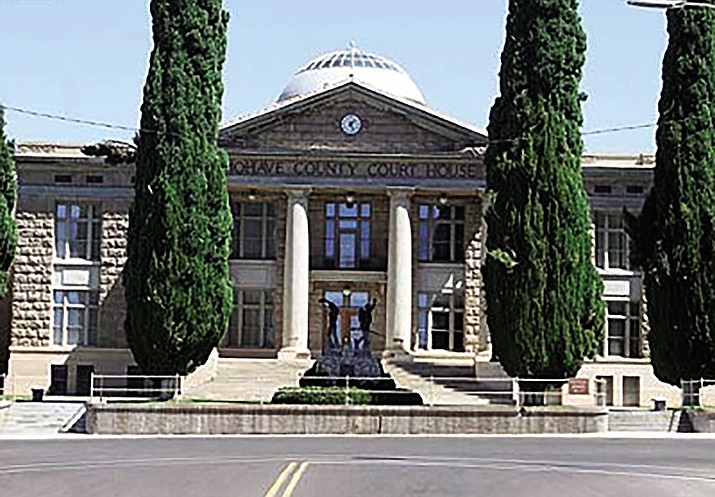 Building a new courthouse to replace the old one on Spring Street pictured here was one of many financial issues the Board of Supervisors laid out during Monday’s meeting.

KINGMAN – The list of economic issues facing Mohave County is at least 10 deep, but there’s nothing on it that money and a little political sway won’t solve.

From protecting the county’s water supply to fixing roads and building a new courthouse, county supervisors laid out their priorities at Monday’s board meeting where no action was taken on funding proposals to address those issues.

Supervisor Gary Watson, who brought the item to the board’s agenda at the April 17 meeting, said the county needs to take a long look at stepping up funding for the Mohave County Sheriff’s Department and the county’s estimated $38 million retirement pension debt.

Deteriorating road conditions are another problem, and Watson wants to put a quarter-cent sales tax increase to the vote of the people and let them make the decision on funding road repairs and reconstruction.

He also wants to look at restoring the 10-cent tax taken from the Mohave County Library District, and building a new animal shelter, a sheriff’s substation and morgue.

Supervisor Jean Bishop said the county is headed into a period of having to make difficult financial decisions, especially with the threat of further “sweeps” of county funds by the state Legislature.

Her top concern is water in Mohave County. The county needs to take every avenue possible, including hiring legal counsel, to make sure residents have a safe and abundant water supply, Bishop said.

Those are all good ideas, Supervisor Hildy Angius agreed, though she would make Mohave County Sheriff’s Office and county roads her main priorities.

Angius said she would want to hold a workshop to see where the county can cut expenses before asking for additional funding for such projects, which would likely come from increased sales and property taxes.

“I don’t think we can solve all the problems in one year,” Supervisor Steve Moss said. “Some of those we’ll need to work on.”

Nearly $24 million is needed for road maintenance each year, and only $15 million is budgeted, he noted. That’s a shortfall of $8 million to $9 million a year in deferred maintenance that will translate to $50 million down the line, Moss said.

His recommendation is to take a half-cent sales tax increase to the voters with a sunset clause of one year to 20 years, and make sure the money goes only toward repair roads, not toward buildings and county government. It would also be distributed equally among the districts.