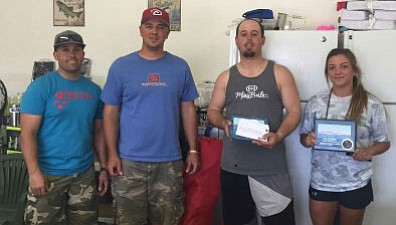 The winners! Tournament Directors Mike Stapleton (L-R) Matt Wolsey with Nik Olivas and Taylor Olivas. The Olivas family, including father Rick were the top bass team in the KFFA tournament at Lake Mead. Taylor also caught the largest bass of the tournament, a lunker that weighed 3.35 lbs. Photo special to the Miner.

Teams launched out of South Cove.

In the largemouth division, there were 15 teams that competed for the top prize.

Coming out on top was the team of Rick, Nik and Taylor Olivas. Their 15 bass limit weighed 30.1 pounds. That earned them a first-place check along with the big bass of the tournament. Taylor Olivas garnered big bass honors with a lunker that weighed 3.35 pounds.

Second place was won by the team of Pat Moore and Mike Collins, whose 13 bass weighed 28.4 pounds.

According to Mike Stapleton, co-director of the tournament, six teams checked in 15 bass, one weighed 14 bass, three weighed in 13 fish, while one team weighed 12 fish.

Three teams checked in 10 fish while one team weighed in seven fish.

Per tournament rules, all bass were returned live back into the lake after they were weighed.

In the striped bass division, the team of James, Lee and Frank Chance took top honors with 40 stripers that weighed 70 pounds, 3 ounces.

Third place was won by the team of Janner Greenhow, Matt Wolsey and Mike Stapleton. That team weighed in 40 stripers that pushed the scales to 69 pounds, 9 ounces.

Big striper of the tournament was caught by Mark Vaughn. That striper weighed 4.2 pounds.

Stapleton noted that there was a free all-you-could-eat lunch at the Meadview home of Fred and Carol Proudfoot for tournament participants. Over $3,000 was raised by the tournament for scholarships for local youth.

The next major fishing tournament is Stripe-R-Rama set for May 20 out of South Cove on Lake Mead. Contact tournament director Johnnie Hoeft at guidehunter@hotmail.com for an application or more information.