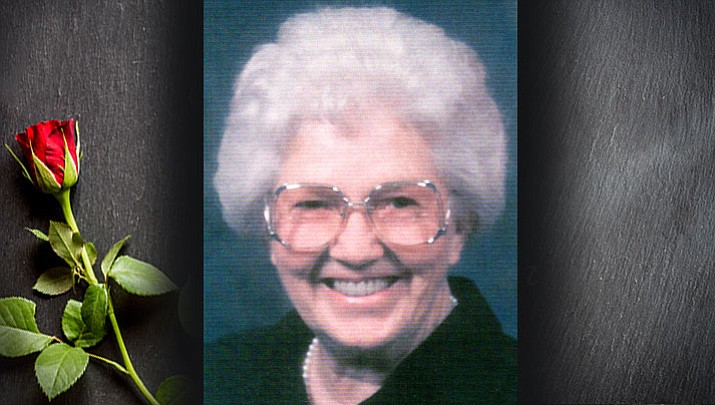 Mary Lou (Potter) Owens was born July 1, 1924, in Hartshorne, Oklahoma to Jesse and Mildred Potter. Very early in life, the family moved to El Centro, California where she attended grade school and graduated in 1942.

She attended a business college and later became an office manager.

During WWII, she met Byron E. Owens, a young sailor serving the U.S Navy, and was married on May 27, 1945. They would have celebrated 72 years this year. Her husband, who became an Ordained Minister of the Assemblies of God fellowship in 1949, survives her. They retired from the ministry in 2007. Their last pastorate was Melody Assembly of God Church in Kingman, Arizona.

Mary Lou was a devoted companion to her husband becoming “First Lady” to seven different pastorates with her husband. She served in music, playing the piano and organ, choirs and special music. She was a talented painter with oil and water paints and enjoyed presenting paintings to family and friends.

The Scriptures call her Blessed!

All her mentioned family above and many other relatives survive her.

Services will be held Monday, May 22, at The First Church of the Nazarene located on North Stockton Hill Road, Kingman, Arizona at 1 p.m. with Rev. David Gray of Kingman officiating. Music will be presented by Karen Peters, of Kingman.