ADWR collecting data on water levels, concerns raised it isn’t enough
‘I don’t need a government agency to come and tell me my well’s dry. I’ll know before you do.’ 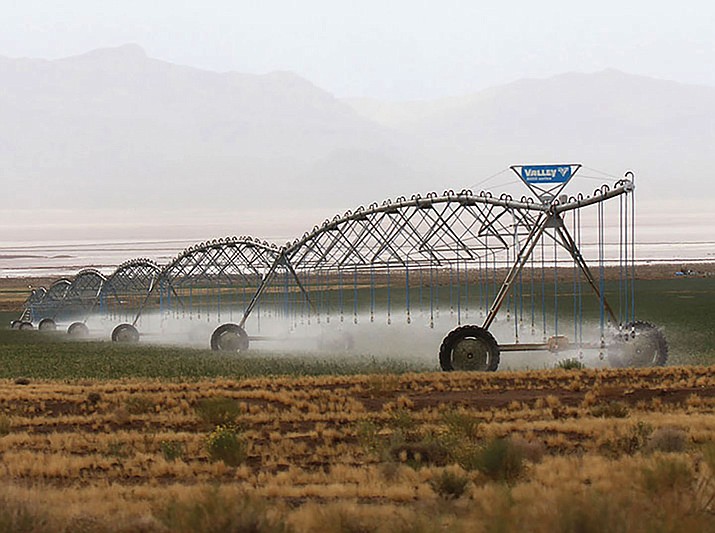 Gerry Walker hears the same questions and comments every time the deputy director for the Arizona Department of Water Resources comes here to present a public workshop on groundwater use and demand.

Nothing was different about Thursday’s update on the Arizona Water Initiative, which drew about 40 people to a “stakeholders” meeting in a conference room at KRMC’s professional medical center.

Walker was there with John Riggins, ADWR coordinator for the Northwest Basins Planning Area, to share the latest findings of the U.S. Geological Survey study and give an update on the Governor’s Water Augmentation Council that met in April.

People sat attentively and politely through the two-hour PowerPoint presentation with occasional questions and fiery comments about the state agency’s lack of power in protecting their water rights.

“You gave me a lot of numbers, but it doesn’t do me any good when someone moves in and starts sucking my water,” one man said. “I don’t need a government agency to come and tell me my well’s dry. I’ll know before you do.”

Walker is well aware that the primary concern of people in attendance is protecting their water supply from encroaching farm operations in Red Lake and Valle Vista areas. She got an earful of that at past meetings held at Mohave Community College.

The goal Thursday was to update people on water supply and usage in the Hualapai, Sacramento, Meadview and Detrital basins.

An audience member questioned the amount for agricultural use, going back to a previous slide that showed 6,552 acres of alfalfa being grown in the Hualapai Basin, and 7,245 acres cleared for planting.

He said it takes 5 acre-feet a year to grow an acre of alfalfa, a water-intense crop.

The man also noted that there are at least 135 wells in the Red Lake area pumping 3,000 gallons a minute. He figures agricultural use is twice the ADWR estimate.

Riggins said ADWR will conduct a “well sweep” of the area in October, and will contract with USGS to estimate water demand for agricultural use, which hasn’t been updated since 2007 or 2008.

Farm operations have increased dramatically over the last couple of years, starting with Las Vegas developer Jim Rhodes and Kingman Farms, which was acquired by a hedge fund and reorganized as Stockton Hill Farms and Red Lake Ventures.

“When are you going to do something?” someone asked.

She said ADWR has a “baseline inventory” of agricultural and industrial wells permitted in the Northwest Basin, but the count may not be exact.

“We’ve driven through the area,” she said. “A lot of them you can see through satellite imagery. You can see them in the area and we’re reaching out to see who they are, so they can’t really hide, but they are not required by law to disclose what their industrial water use is.”

Because Red Lake is outside of an Active Management Area, ADWR has no control over “beneficial use” of the underground water supply, which includes agricultural use.

Riggins was asked if there’s a reporting process to ADWR for planned development and farming.

“No. We don’t know what’s being planned,” he answered. “We reach out to the county and city to see if they know, but I don’t send out a blanket email. You’re not in an AMA (Active Management Area) or INA (Irrigation Non-expandable Area), so they don’t have to tell us specifics on water use.”

Riggins said several master-planned residential developments were proposed in the northern portion of the Hualapai Basin, and he’s heard that many of those have been converted to agriculture.

The Arizona Water Initiative was signed by Executive Order in December 2015, based on a report that identifies key priorities, timelines and action needed to maintain water supply for Arizona’s future.

ADWR is working closely with stakeholders in 22 planning areas to identify issues that are resulting in imbalances of water demand and supply, and to develop strategies to address those imbalances.

Walker said increased agricultural use of water in Mohave County is one of the primary reasons the Northwest Basin was selected as one of the 22 planning areas.

Updated information on the Arizona Water Initiative can be found at https://new.azwater.gov/water-initiative.