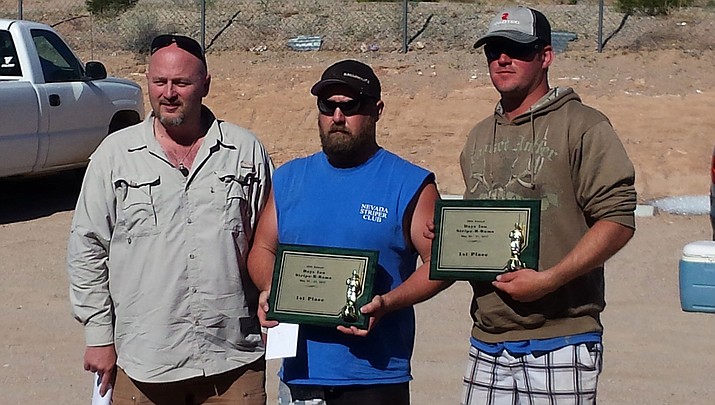 MEADVIEW – For the 36 teams that were entered into this year’s Stripe-R-Rama striper tournament, perfect weather and hungry fish were what they found.

The annual event, which is sponsored by local hotel/motel magnate John Patel, is the largest overnight striper team tournament of the summer.

Two-person teams spread out from South Cove to Temple Bar for the event, in which anglers fish for striped bass, the most prolific sport fish in Lake Mead.

With estimated populations measuring into the millions, the stripers that the anglers bring in are almost insignificant.

The format allows teams to bring in their 40 largest stripers to the scales. The teams with the most weight win prizes and plaques, plus every person who fishes in the tournament receives an item off of the prize table, which is all paid for by Patel.

Anglers from Mohave County, the Las Vegas area who are members of the Nevada Striper Club, and a team from St. George, Utah participated in the overnight event.

This year there were seven places paid, according to tournament director Johnnie Hoeft. Four of those places had ties and final positions were decided by a big fish, something that had never occurred before.

Ryan Asplin and Troy Nolte came in seventh place with 71 pounds, 7 ounces. Sixth place was won by Fred Proudfoot and Ed Walker at 73-4. The father-son team of Merlyn and Dave Coffman was fifth with a weight of 73-11.

Mike Van Zant and Charlie Suttles came in fourth also with 73-11, but were given fourth due to landing the larger big fish. Utah residents Stacy and Tom Sanderson took third place.

Under tournament rules, Madden and Holmstrom won the tournament by weighing in the larger big fish against the Hoopers.

Proudfoot and Walker took the tournament’s largest striper award with a big fish weighing 3 pounds, 2 ounces. The second-place big fish was brought in by the father-son team of Dan and Danny Reed at 2-8.

There is always an award for the largest non-striper brought in, and the team of Ted and Leona Proudfoot took that honor with a catfish that weighed 4 -7.

A total of 1,341 fish were brought to the scales by tournament anglers. Those fish collectively weighed 2,159 pounds, according to Hoeft.

While many anglers kept their fish, a lot more fish were donated to either the tournament sponsor Patel or to the Meadview Baptist Church. The church received 450 fish, according to member Don Lash.