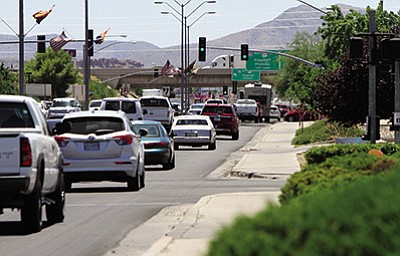 KINGMAN – It comes as no surprise to local motorists that six of the 20 most dangerous signal intersections in Mohave County are on Stockton Hill Road, accounting for 917 crashes over the last 10 years.

Excluding ADOT-controlled intersections, Kingman takes the top six spots, with the intersection of Airway Avenue and Harrison Street and Willow Road ranking No. 1.

Overall, the worst intersection in the county is at State Route 95 and Marina Boulevard in Bullhead City, which has a crash frequency of 211, a crash rate of 1.60 and a severity index of 1.58.

Those are three criteria used by Amec Foster Wheeler to rank the intersections for the WACOG Strategic Transportation Safety Plan that will establish regional goals, strategies and safety projects.

“These 20 have the highest potential for safety improvement,” said Mike Blankenship, traffic engineer for Amec Foster Wheeler. “It’s up to not only WACOG (Western Arizona Council of Governments), but individual agencies if you want to change it.”

The ultimate goal is to save lives and reduce serious injuries, he said.

Blankenship reported a total of 26,840 crashes over a 10-year period in Mohave and La Paz counties, excluding Lake Havasu City, including 515 fatalities.

He presented the data Wednesday during a workshop that drew about 20 people, mostly public officials from Mohave County, Kingman, Bullhead City and Lake Havasu City.

Lane departure was the leading cause of fatal crashes at 61 percent, followed by occupant protection (not wearing seatbelts) and speeding, both at 47 percent, and impaired driving at 32 percent.

Steve Latoski, director of Mohave County Public Works, said he didn’t want to detract from the work put into the rankings, but questioned equal weight being given to each of the three criteria.

He felt the severity of the crashes, particularly the number of fatalities, should weigh more heavily than crash frequency. He also noted discrepancies in the ownership of intersections on the list, as well as some confusion over road names.

Scott Kelley of Amec Foster Wheeler introduced a “segment” analysis that drops a three-tenths mile window over busy traffic corridors and can be moved along the corridor for a more “granular” identification of crash locations.

Frank Marbury, assistant city engineer for Kingman, said Beverly Avenue has “functionality issues” around Stockton Hill Road that lead to people pulling into the shopping center and exiting at the Staples intersection, which ranks No. 12 on signal intersections controlled by local agencies.

Blankenship said cities, counties and Arizona Department of Transportation are all chasing the same “pot of gold” for the state’s Highway Safety Improvement Program, which is typically $40 million a year.

However, with some of the money already allocated, the pot is around $25 million for the next couple of years, he said.

515 Fatalities: The carnage has been severe on Western Arizona highways
Six of the 10 intersections with the most crashes in Kingman are located along Stockton Hill Road
Distracted drivers complicate Stockton Hill traffic
ADOT plans Kingman area upgrades
Avoiding gridlock