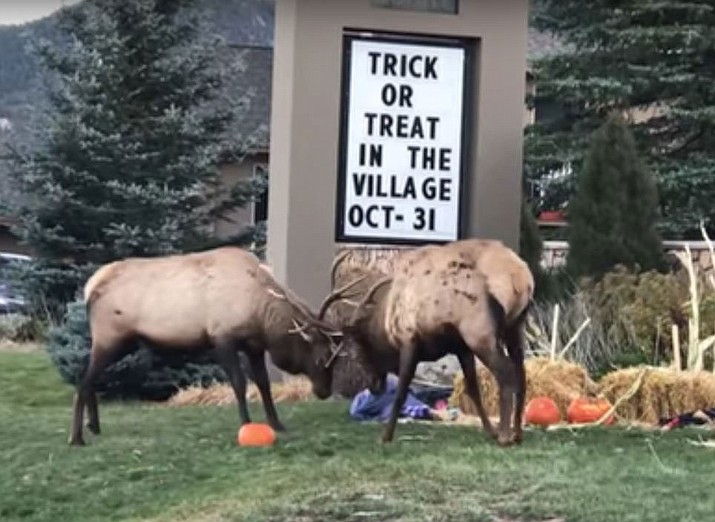 A Colorado resident filmed the two elk in front of a hotel in the popular mountain tourist community of Estes Park Wednesday.

"They had already destroyed the display and were trying to get at and eat the pumpkins," the resident wrote. "The funniest moment came when one of their huge antlers dislodged one of the pumpkins that proceeded to roll down the little hill watching it as it went. They then proceeded to go back to battling it out," the filmer wrote.

BERLIN (AP) – It’s legal to drink beer in German movie theaters – but it’s probably not a good idea to try to open your beer bottle with a pepper spray canister.

However, that’s exactly what a thirsty moviegoer tried doing at a cinema Monday night in the northwestern German town of Osnabrueck.

Instead of opening his beer, the 29-year-old man broke his pepper spray container and some 200 people had to quickly leave the theater in tears.

The cinema’s manager told the German news agency dpa on Wednesday that it was “chaos.” Still, he kept his head, calling police, offering beverages to moviegoers and opening the windows. He says the movie was restarted after 30 minutes.

Police say so far no moviegoers have complained about eye or breathing problems.

The City Council voted Tuesday to repeal a 91-year-old law that banned dancing at most nightspots. The anti-dancing law prohibits dancing in bars and restaurants that don’t have a cabaret license.

Critics say the law originated as a racist attempt to police Harlem’s 1920s jazz clubs and has continued to be enforced unfairly.

John Barclay, a bar manager and founder of the Dance Liberation Network, said the law “has decimated New York City culture for the past century.”

The repeal of the anti-dancing law will go to Democratic Mayor Bill de Blasio, who has said he supports it. The repeal would go into effect 30 days after it’s signed.

RIVERSIDE, California (AP) – Halloween started early in one Southern California city, where a man dressed as Forrest Gump has been running around neighborhoods and stopping to take pictures with residents.

Video and a photo from police show the man sporting a mangy fake beard, red shorts and a red “Bubba Gump” hat during his jogs around the city of Riverside. It’s the same outfit worn by Tom Hanks in the 1994 Oscar-winning film “Forrest Gump.” Hanks’ character spends part of the movie running across the country.

The man identified himself to KABC-TV only as Forrest Gump. He added that “it doesn’t really matter” who he is. He says his runs are “just something that took off and made the community happy, made people smile.”

State Environmental Police and federal fisheries regulators are trying to figure out who dumped the headless fish, which had to be hauled out of the trees by a tow truck.

Authorities won’t say exactly when the tuna was found or who tipped them off.

But Ally Rogers, a spokeswoman for the National Oceanic and Atmospheric Administration Fisheries Office for Law Enforcement, tells the Gloucester Daily Times that the fish was illegally harvested.

The tuna season runs from early June to November.

Maj. Patrick Moran of the Environmental Police says he’s never before had to investigate a tuna in the woods.

And the Emmy goes to...
Run, Forrest, er ... Robla, Run!
Strange, but true: Koala rescued from drilling rig at construction site
Letter | The people who are supposed to be looking out for Kingman citizens seem to have lost their way
Strange, But True | Man cited for using a pumpkin as a weapon
Event Calendar