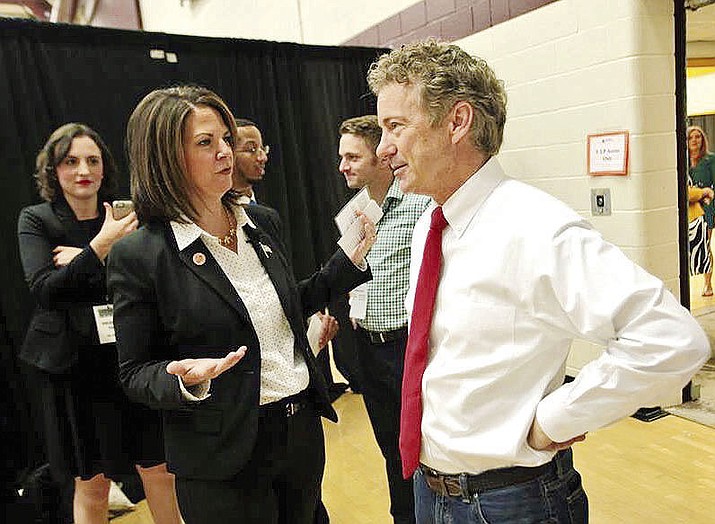 Kelli Ward tweeted this photo Wednesday of a conversation with Sen. Rand Paul, saying she was honored to have the support of the influential Kentucky Republican.

Sen. Rand Paul gave Kelli Ward another big boost in her campaign to replace Jeff Flake in the U.S. Senate.

The influential Kentucky Republican announced on Fox News Wednesday he was backing Ward’s campaign, a move that will help cement her role as the candidate to beat in what some are predicting will become a messy primary.

“She’s a thoughtful leader, somebody who is an outsider, not a career politician,” Paul said during an interview on “America’s Newsroom.” “I think she would make a great senator from Arizona. … Some people in the establishment have dumped on her and I’m out there to let people know that conservatives will unite behind Kelli Ward, and I think she will have a great chance of being the next senator from Arizona.”

In a press release from the Ward campaign, Paul was quoted as saying Ward’s background as a physician made her uniquely qualified to have a voice on legislation affecting healthcare.

“As a fellow physician, Dr. Ward witnessed firsthand the damage Obamacare has inflicted on our nation’s healthcare system,” Paul said in the release. “As senator, she will bring a new voice and a fresh perspective to the Senate.”

Ward said on Twitter she was honored to have Paul’s support. His endorsement comes just weeks after Ward was feted by former White House chief strategist Steve Bannon and conservative talk show host Laura Ingraham. President Donald Trump also backed Ward in August after she announced her campaign against Flake.

Ward is currently the only official candidate in the race, but other Arizona Republicans who may run include Rep. Martha McSally and state Treasurer Jeff DeWitt, and former GOP chairman Robert Graham. Ward could face Rep. Krysten Sinema, a Democrat from Phoenix, in the general election. That’s a prospect that has some Republicans fretting, according to the New York Times. The newspaper said “establishment Republicans” were scrambling to find a candidate to replace Flake and wage a primary challenge against Ward. “Party leaders fear she would lose to Ms. Sinema in the general election,” the New York Times reported. The newspaper further pointed out that Ward was “beaten badly” by Sen. John McCain in her first Senate run in 2016, but the race was fairly close with McCain receiving 51.2 percent of the votes to Kelli Ward’s 39.9 percent – a difference of about 67,000 votes in a statewide race.