Aging rest stops could be seeing a facelift 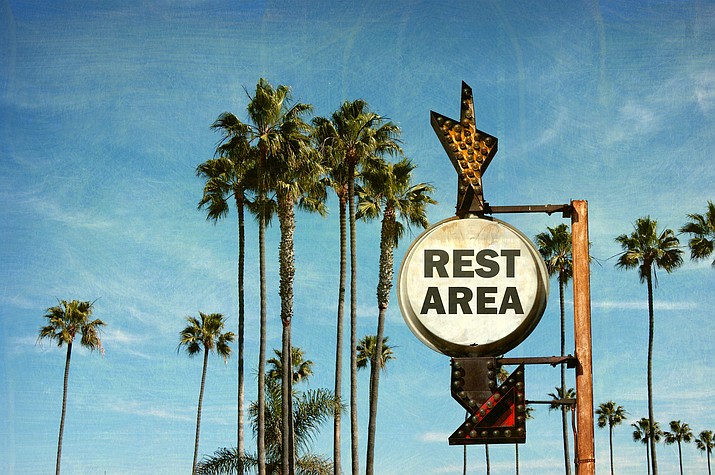 The aging, worn out rest areas across Arizona are in need of a facelift. Gov. Ducey said he hopes it is coming soon.

PHOENIX – The way Gov. Doug Ducey sees it, Arizona rest stops would be better if there were Starbucks coffee shops, Cracker Barrel restaurants and perhaps even AM/PM gas stations.

What would make them better, said press aide Daniel Scarpinato, is that the companies that would locate adjacent to highways would be willing to pay money to the state. Those funds, he said, could be used not only for upkeep but even to rebuild the existing 28 rest areas but also build new ones.

It might even generate excess dollars for state coffers.

But the hurdles could be more than opposition from existing businesses that are located at the bottom of exit ramps who benefit from travelers having to get off to grab a bite, gas up or use the restroom. Ducey also needs a waiver from Elaine Chao, secretary of the U.S. Department of Transportation, from a 1950s- era law that forbids such commercial operations on highways built with federal dollars.

Scarpinato said the proposal makes sense for Arizona, both for the state as well as those who use the roads.

“We have aging rest stops,’’ he said. “Many of them are now 40-plus years old, and there’s a cost to maintain them.’’

That presumes maintenance is enough.

He said some likely need to be rebuilt entirely. Scarpinato said that, given changing driving patterns, some may be located in areas where they’re no longer needed.

Commercial rest areas are fairly common back East. But that’s because states that had them in place by the beginning of 1960 were allowed to keep them.

Ducey, in a letter to Chao, wants her help in repealing that law.

More immediately, he is asking her to use her authority to authorize “a pilot project demonstrating the technology and innovation benefits of operating rest areas through a partnership with the private sector.’’ Put another way, the governor wants a waiver from the law.

But that leaves the question of whether having state-sanctioned commercial establishments, conveniently located so motorists don’t have to get off the highway, amounts to unfair competition with the businesses that have invested in space along the exit ramps.

That question is not academic. Any move will get opposition from the National Association of Truck Stop Owners which takes the stance that commercial rest areas “jeopardize private businesses that for the last 50 years have operated under the current law’’ and established locations at highway exits.

“Due to their advantageous locations, state-owned commercial rest areas establish virtual monopolies on the sale of services to highway travelers,’’ the organization’s position states. “Allowing states to set up shop along the interstates threatens more than 97,000 businesses nationwide and jeopardizes 2.2 million jobs.’’

Scarpinato brushed aside the concern, insisting that businesses along the highways actually would welcome the commercial rest stops.

“Right now some of these businesses are essentially having to operate as public rest stop facilities,’’ he said.

He did not dispute, however, that those who stop to use the facilities also may buy some snacks or gasoline. And Scarpinato said that doesn’t necessarily mean that those snack shops, restaurants and gas stations that don’t get to locate on state highways will end up losing business.

“Look, the fact is that people are going to make decisions of where they want to go,’’ he said.

Anyway, Scarpinato said, the questions about competition are getting ahead of the issue. He said none of this is going to happen unless either Congress repeals the restriction or Chao grants an exemption.

Ducey made his case in his letter.

He said other states have provided “better, safe, more modern rest stops’’ with these public-private partnerships. The governor said Connecticut alone has a deal that will net that state $100 million.

“But in Arizona, we face a major roadblock to these partnerships: An archaic and nonsensical federal prohibition that punishes younger states, especially in the West,’’ Ducey wrote to Chao.

There was no immediate response from her office.

But according to NATSO, when Congress last considered the issue in 2012, senators voted 86-12 against an amendment to repeal the prohibition on commercial rest areas.

Scarpinato, however, said he expects the traveling public to line up behind what Ducey wants to do.

“I think a lot more people would be using them if they felt they were safe, clean facilities that they could enjoy with their families,’’ he said.

“I think there’s a lot of people right now who may not feel comfortable stopping at some of them,’’ Scarpinato continued. “The idea of having a nice place where you could sit down with your family and have some sandwiches and use the rest room and stop on your way to your trip to San Diego just kind of fits in with the idea of better quality of life and safety.’’

This isn’t the first time Arizona has tried a public-private partnership to keep up its rest areas.

In 2013, then-Gov. Jan Brewer accepted a proposal from Tennessee-based Infrastructure Corp. of America to maintain the rest areas.

In exchange, it was allowed to sell naming rights and advertising. And the state was guaranteed $355,000 over the life of the five-year contract.

Matt Clark, the governor’s transportation adviser, said that’s pretty much all it generated, what with limits the federal government placed on where advertising could be placed.

That contract is now expiring. And Scarpinato said his boss believes the state can do better, not only financially but actually end up with rest stops that people will want to use.