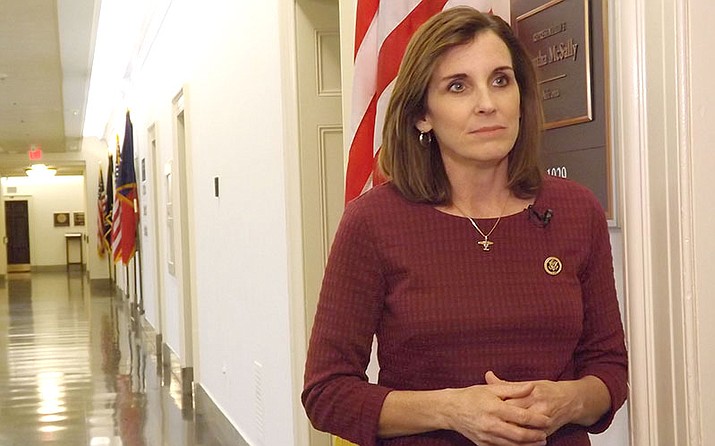 Rep. Martha McSally, R-Tucson, welcomed the Air Force decision to keep the A-10 flying, but has concerns about the ability of the F-35 to replace the “Warthog” in close-air support roles.

WASHINGTON – Rep. Martha McSally, R-Tucson, has told House colleagues that she will run next year for the seat being vacated by Arizona Republican Sen. Jeff Flake, setting the stage for what could be a fractious primary fight with Kelli Ward.

Flake announced last month that he would not seek re-election because he did not think he could win a GOP primary without resorting to the sort of incivil politics he said is causing Washington gridlock.

That left the field to Ward, a vocal Trump supporter who ran unsuccessfully against Sen. John McCain in 2016.

Political analysts say McSally, with a compelling personal history and a hefty campaign bank account, has a good chance of beating Ward in a primary.

But Trump backers are already lining up against McSally, whom they are trying to paint as an establishment candidate.

ConservativeHQ Chairman Richard Viguerie said McSally was an “establishment, big government candidate” who would be “in the pocket of (Senate Majority Leader) Mitch McConnell” if she were elected.

Viguerie said Tuesday that the conservative movement “is in a state of flux” and he called on voters to unite behind a “fine, strong, principled limited-government conservative” like Kelli Ward.

McSally’s office declined to comment Tuesday on a possible Senate bid. But published reports last week said her House campaign manager responded to conservative attacks on McSally by pointing to analyses that show she voted in line with Trump’s position 96 percent of the time.

“A number of national Republican conservative groups have promised to oppose her candidacy,” said Jennifer Duffy, senior editor for the Cook Political Report.ÿ”Although I suspect that she is more conservative than conservative activists give her credit for.”

MBQF Consulting analyst Mike Noble said the primary now will be a battle between the Republican Party’s factions and a “referendum on how the president is doing” – a referendum that he said McSally would win if the election were held today.

Noble said Ward has been dogged by “insensitive comments about McCain” after it was announced he had been diagnosed with brain cancer, and attack ads over her support for town hall hearings while in the state Senate over “chemtrails” left by jets.

But Noble said a primary victory is not a slam dunk for McSally with groups like Club for Growth and ConservativeHQ lined up against her.

“These big groups have the power and the clout to influence primaries,” Noble said, adding that she would fare better if she had support beyond the establishment.

Whoever wins the primary, Noble thinks she will face an uphill battle in the general election against Rep. Kyrsten Sinema, D-Phoenix, the current Democratic front-runner for the seat.

But another political consultant, Jason Rose, said a McSally bid would be “welcome news” for Republicans if they hope to beat Sinema, “one of the best politicians in Congress.”

“McSally was one of the first women fighter pilots,” he said, “and she’s battle-tested.”

Rose expects a challenging primary, but said McSally “is the best Republican that could possibly win.” He said a McSally-Sinema would be a toss-up to “leaning Sinema.”

McSally is relatively well-funded, with $1.45 million in the bank for her House campaign fund to Ward’s $284,536 as of Sept. 30, according to the most recent reports with the Federal Election Commission.

But Sinema reported to the FEC that she had more than $4.1 million in cash on hand as of Sept. 30. The only other announced candidate is first-time Democrat candidate Deedra Abboud, whose FEC report showed a campaign account of $7,849.

Abboud says “she has known for about a week” that McSally would be running and was quick to point out that “the top four contenders for the seat will be women, for a seat that has never had a woman.”

She called the all-woman field “very exciting” and said that anything could happen in the general election.