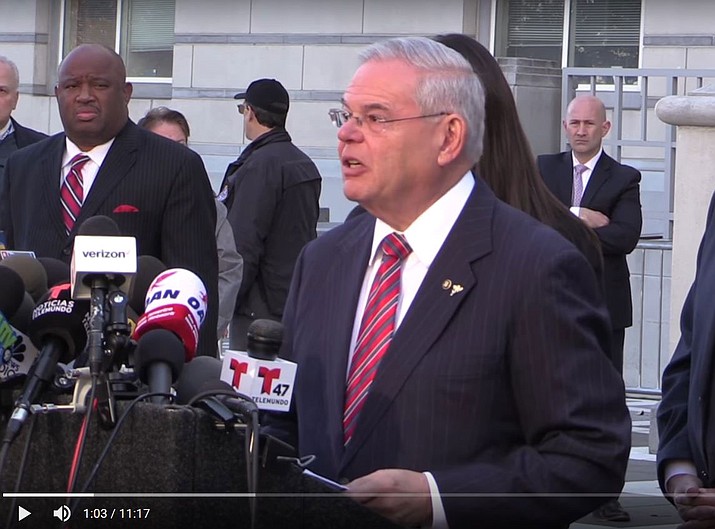 Sen. Bob Menendez speaks during a press conference Thursday after learning his trial ended with a hung jury.

NEWARK, N.J. (AP) – The federal bribery trial of Democratic Sen. Bob Menendez ended in a mistrial Thursday with the jury hopelessly deadlocked on all charges against the New Jersey politician and a wealthy donor. Prosecutors did not immediately say whether they plan to retry the lawmaker.

U.S. District Judge William Walls declared a hung jury after more than six full days of deliberations that had to be restarted midway through when a juror was replaced.

Outside the courthouse, a choked-up Menendez fought back tears as he blasted federal authorities and thanked the jurors "who saw through the government's false claims and used their Jersey common sense to reject it."

"Certain elements of the FBI and of our state cannot stand, or even worse, accept that the Latino kid from Union City and Hudson County could grow up to be a United States senator and be honest," said Menendez, the 63-year-old son of Cuban immigrants.

Juror Edward Norris said 10 jurors wanted to acquit Menendez on all charges, while two held out for conviction. Norris said that after the prosecution rested, "in my gut I was like, 'That's it? That's all they had?'"

The inconclusive end to the 2½-month trial could leave the charges hanging over Menendez as he gears up for an expected run for re-election next year to the Senate, where the Republicans hold a slim edge and the Democrats need every vote they can get.

On Capitol Hill, the top Republican in the Senate, Majority Leader Mitch McConnell, called on the Ethics Committee to immediately investigate Menendez for possible violations of the public trust and the Senate code of conduct.

Menendez was accused of using his political influence to help Florida eye doctor Salomon Melgen in exchange for luxury vacations in the Caribbean and Paris, flights on Melgen's private jet and hundreds of thousands of dollars in campaign contributions to organizations that supported the senator directly or indirectly.

According to prosecutors, Melgen essentially put Menendez on the payroll and made the politician his "personal senator," available as needed.

The defense argued that the gifts were not bribes but tokens of friendship between two men who were "like brothers." In Menendez attorney Abbe Lowell's closing argument, he used the words "friend," ''friends" or "friendship" more than 80 times.

Menendez's lawyers contended also that the government failed to establish a direct connection between Melgen's gifts and specific actions taken by the senator.

The two men faced about a dozen counts each, including bribery, conspiracy and the most serious charge, honest services fraud, punishable by up to 20 years in prison. The senator was also charged with making false statements in failing to report gifts from Melgen on his financial disclosure form.

In a statement, the U.S. Justice Department said it will consider its next step.

After the mistrial, Menendez's political adviser, Mike Soliman, said "all things indicate" the senator will run for re-election and an announcement will probably be made in the coming weeks. Menendez, who has been under indictment for 2½ years, has already raised more than $2.5 million this year.

Menendez himself warned outside the courthouse: "To those who were digging my political grave so they could jump into my seat, I know who you are and I won't forget you."

The Republicans have a 52-48 edge in the Senate as they try to push through President Donald Trump's agenda.

The jury deliberated most of last week, then restarted on Monday with an alternate after a member was excused because of a long-planned vacation. The jurors also said on Monday that they couldn't agree on a verdict, but the judge asked them to keep trying.

This time, the jurors said in a note that that had reviewed all of the evidence in great detail and "tried to look at this case from different viewpoints," but they were "not willing to move away from our strong convictions."

Melgen is already facing the possibility of a long prison sentence after being convicted in April of bilking Medicare out of as much as $105 million by performing unneeded tests and treatments.

The last sitting senator convicted of a crime was Ted Stevens of Alaska, a Republican found guilty in 2008 of concealing more than $250,000 in home renovations and other gifts. His conviction was later overturned because of prosecutorial misconduct, and he died in a 2010 plane crash.

The Menendez case was the first major federal bribery trial since the U.S. Supreme Court in 2016 threw out the conviction of Republican former Gov. Bob McDonnell of Virginia and narrowed the definition of bribery.

In recent months, the McDonnell ruling led judges to overturn the convictions of at least three other public officials, including a former Louisiana congressman. Menendez's lawyers had likewise hoped to get the case against the senator dismissed, but the judge refused.

Menendez served in the House from 1993 until he was appointed to fill a Senate vacancy in 2006. He has chaired the Foreign Relations Committee and was a major player in the unsuccessful bipartisan "Gang of Eight" effort to overhaul the nation's immigration laws in 2013.

More recently, he drew the ire of some fellow Democrats when he opposed President Barack Obama's nuclear deal with Iran and efforts to restore diplomatic relations with Cuba.