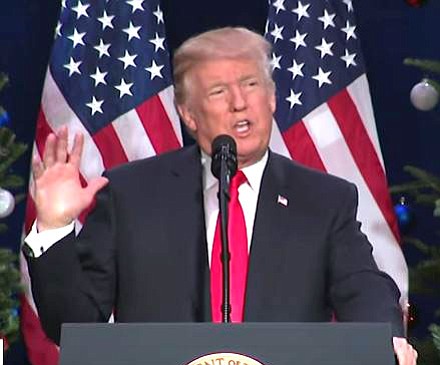 President Trump talks tax plan at an event in St. Charles, Missouri in this screen grab for an Associated Press video. Trump has called for more sanctions against North Korea after its latest ICBM test.

WASHINGTON (AP) – The Trump administration threatened new sanctions on North Korea on Wednesday after the reclusive government shattered 2½ months of relative quiet with its most powerful weapon test yet, an intercontinental ballistic missile that some observers believe could reach Washington and the entire U.S. Eastern Seaboard.

President Donald Trump tweeted that he spoke with Chinese President Xi Jinping about Pyongyang's "provocative actions," and he vowed that "additional major sanctions will be imposed on North Korea today. This situation will be handled!" Trump's top diplomat, Rex Tillerson, said the U.S. could target financial institutions doing business with the North.

The U.N. Security Council, meanwhile, was due to hold an emergency meeting Wednesday afternoon.

The fresh deliberations about new forms of punishment for North Korea came after its government said it successfully fired a "significantly more" powerful, nuclear-capable ICBM it called the Hwasong-15. Outside governments and analysts concurred the North had made a jump in missile capability.

A resumption of Pyongyang's torrid testing pace in pursuit of its goal of a viable arsenal of nuclear-tipped missiles that can hit the U.S. mainland had been widely expected. But the power of the missile and suddenness of the test jolted the Korean Peninsula and Washington. The launch at 3:17 a.m. Wednesday local time – early Tuesday afternoon in the U.S. capital – indicated an effort to perfect the element of surprise and obtain maximum attention in the U.S.

In a government statement released through state media, North Korea said the Hwasong-15, the "greatest ICBM," could be armed with a "super-large heavy nuclear warhead" and is capable of striking the "whole mainland" of the U.S. The North said the missile reached a height of 2,780 miles and traveled 590 miles before accurately hitting a sea target, similar to the flight data announced by South Korea's military.

After the launch, it said leader Kim Jong Un "declared with pride" that his country has achieved its goal of becoming a "rocket power." State TV said Kim gave the order Tuesday, and it broadcast a photo of Kim's signed order where he wrote: "Test launch is approved. Taking place at the daybreak of Nov. 29! Fire with courage for the party and country!"

The firing was a message of defiance to the Trump administration, which a week earlier restored North Korea to a U.S. list of terror sponsors. It also ruins nascent diplomatic efforts, raises fears of war or a pre-emptive U.S. strike and casts a deeper shadow over the security of the Winter Olympics early next year in South Korea.

A rattled Seoul responded by almost immediately launching three of its own missiles in a show of force.