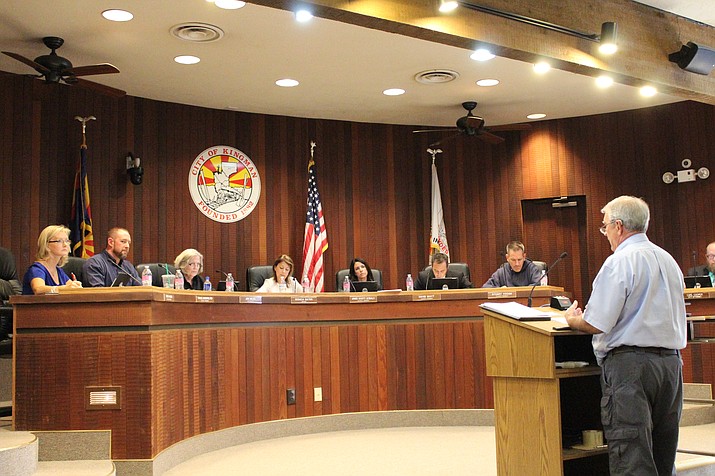 John Timco presents his financial and partnership framework to the City Council Oct. 3 at a special meeting in Council Chambers.

KINGMAN – Tensions were high in the Kingman City Council Chambers Tuesday during its special meeting to discuss the two interchange projects.

The pressure increased almost immediately when Mayor Monica Gates protested she had no supporting documentation on anything that was listed on the agenda.

“I don’t even know where to start,” the mayor said.

The second agenda item was to discuss and take action on merging the Kingman Crossing and Rancho Santa Fe interchange projects into one that would be designated the Interstate 11 East Kingman Connection Project. Vice Mayor Jen Miles said there had been a lot of discussion surrounding the two interchanges, so the topic was not new.

“I believe Representative Cobb was quite clear … that we need to begin cooperating,” Councilmember Stuart Yocum said. “We need to create a proposal that the two projects as one that she can take it to the governor.”

Yocum made the motion to proceed with grouping the interchanges in as one project, and Lingenfelter seconded it. Before a vote, Councilwoman Jamie Scott Stehly said that in an initial workshop called by Mayor Gates, council came together and discussed the projects and everybody agreed that it should be two interchanges under one project.

Council voted 6-1, with Mayor Gates being the only one opposed, agreeing to place both interchanges under one project, formally known as the I-11 East Kingman Connection Project.

But the meeting didn’t stop there.

Before John Timco could begin his presentation regarding the financial and partnership framework for the project, Mayor Gates interrupted by explaining to City Attorney Carl Cooper she had not received any backup for the agenda item with hopes of canceling the presentation. Cooper explained that Council has the right to waive any requirements it has in its meeting handbook.

Timco, a member of the Rancho Santa Fe Parkway subcommittee formed by Council, began the presentation by saying that this was not a commitment to both projects, but merely a presentation to show that both interchanges are possible based on the estimates he had.

“Yes, this is an estimate based on assumptions on the available funding list,” Timco said.

The funding list is including Arizona Department of Transportation funds of $20 million, leftover funds from the current year budget, next year’s city budget and two years’ worth of revenue from the half cent Transaction Privilege Tax, or sales tax.

In his presentation, Timco said that ADOT would have to put Kingman on their cycle before funds started showing up. To make up for the lack of $20 million at the beginning of the project, he suggests Kingman Region Medical Center and Rancho Santa Fe area landowners contribute the shortfall amount per year until ADOT funding does start to come in. Then, once the funding is received, KRMC and the landowners would be paid back. The balance that is leftover after repaying KRMC and landowners, which Timco estimates to be $16 million, can be used at Council’s discretion regarding the projects.

“Can we do this? Yes,” Timco said. “What would kill this is not being united. We can’t go to ADOT squabbling. It’s silly, quite frankly, to have all the i’s dotted and t’s crossed before deciding to take the first step.”

Timco added that he has a commitment from KRMC that they will not actively oppose this proposal.

During the discussion, Gates said she has always thought both projects have merit.

“I just don’t want to put the funding of two interchanges on the back of our taxpayers,” Gates said.

“I think it is premature to say that we are burdening our citizens with funding these projects,” Yocum replied.

In a 6-1 vote, Council decided to adopt the financial and partnership framework for the project.

Another 6-1 vote had the council creating a budgetary line item for the project, and a Request For Qualifications to hire a program manager for the project also passed, 6-1.