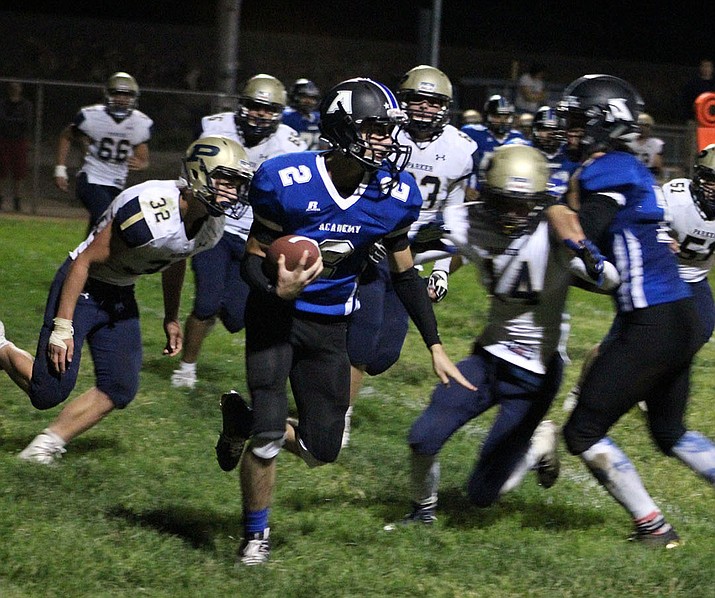 Kingman Academy’s Stevie Wusstig rushed for 194 yards and two touchdowns in a 44-14 win at Chandler Prep.

KINGMAN – The Kingman Academy football team didn’t get off to a fast start against No. 7-ranked Chandler Prep Friday night, but the 20th-ranked Tigers quickly found their stride in the second half to cruise to a 44-14 win over the Titans (5-2, 3-0 2A Metro East).

“Chandler Prep played really hard for a half and then we just imposed our will on them,” said Academy head coach Dan Stroup. “We ran the ball because they chose to defend the pass. I thought they would do a little switching back and forth, but they really didn’t.”

Kekoa Makaiwi-Stroup went 7-for-15 with 113 yards, one touchdown and one interception. Gabe Imus caught four passes for 54 yards, while Hayven Potter caught a 38-yard touchdown.

Defensively, Wheeler led the way with 14 tackles and Martin added nine stops. Butler finished with six tackles, a sack and a forced fumble that was recovered by Sonny Munoz.

“I was really happy with our defensive staff – John Morgando, Mike Seybert, Mitch Jantzen and Marty Edwards,” Stroup said. “They did a really good job preparing them.

“This is probably one of our best defensive games. They weren’t a pushover offense.”

In a 6:20 span between the third and fourth quarters, the Academy scored five touchdowns.

“It was kind of a wearing down process,” Stroup said. “Similar to last year – it was pretty close at half and then all of a sudden, we just exploded on offense.”