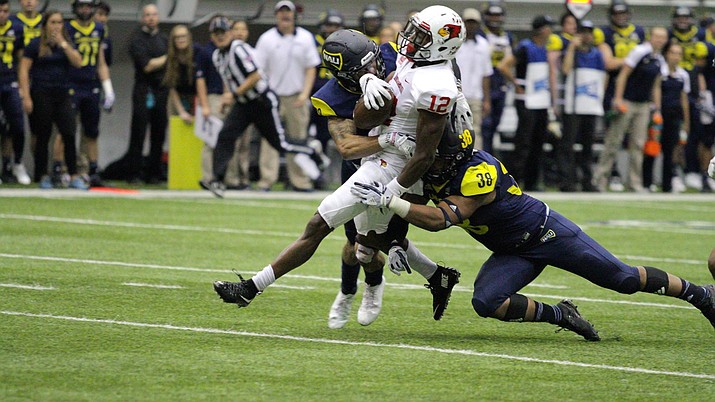 Northern Arizona's defense was stout against No. 7 Illinois State.

FLAGSTAFF - The Northern Arizona football team rang up 431 yards of total offense against the nation's No. 2 ranked defense as it posted its third consecutive victory by a 37-16 count over No. 7 Illinois State on Saturday at the J. Lawrence Walkup Skydome.

The Lumberjack defense intercepted three passes and recorded five sacks in the win while limiting the Redbirds' rushing attack, which entered the contest averaging 190.2 yards per game, to just 63 yards on 29 carries.

With the win, NAU moves its overall mark to 3-2. The victory also marked the Lumberjacks' first over a ranked opponent since they defeated then No. 10 Montana 45-34 on Oct. 22, 2016. Illinois State suffered its first defeat of the season and slips to 4-1 overall.

""I'm really pleased with the way our guys answered the challenge of playing a nationally-ranked team and defending our home turf," NAU head coach Jerome Souers said. "I was very pleased with our defense scheme and effort. In the end the coverage and the turnovers were the difference and that's how we closed the game out."

Following a scoreless opening quarter, the Lumberjacks exploded for 27 points over the next two quarters to open up a 27-9 advantage entering the final quarter of action. Sophomore place kicker Griffin Roehler opened up the scoring for NAU with a pair of field goals in the second quarter, including a career-best 41-yarder.

NAU quarterback Case Cookus closed out the opening half with a 32-yard touchdown strike to senior receiver Elijah Marks, making the score 13-6 at intermission. Cookus added another scoring toss just 3:38 into the third quarter as he found Wallace Gonzalez from 21 yards out for his first touchdown reception of his collegiate career, upping the NAU advantage to 20-9.

Cookus followed with a touchdown reception of his own after he hit teammate Chance Brewington with a lateral pass before returning the favor by finding Cookus on the opposite sideline for the quarterback's first scoring reception of his NAU career on a play that covered a total of 23 yards – increasing the margin to 27-9.

Roehler added his third field goal of the game from 33 yards out at the 13:59 mark of the fourth quarter before Illinois State finally managed to get in the end zone on a 15-yard touchdown pass from Jake Kolbe to Spencer Schnell with 8:08 remaining in regulation.

NAU junior running back Cory Young closed out the scoring by hauling in Cookus' third touchdown pass of the game for a 23-yard score with 2:49 left in regulation.

Illinois State entered the game with the nation's second-ranked unit in total defense (166.5 ypg), third in scoring defense (8.8 ppg) and second in passing yards allowed (113.8) – the Lumberjacks shredded the Redbirds' defense for a total of 431 yards and 403 yards through the air.

The Lumberjack defense was paced by junior safety Josh Clarke who finished with 11 tackles, including a sack and three total tackles for loss. Byron Evans, Maurice Davidson and Andrew Gose each picked off a pass in the win while limiting Illinois State to just 223 yards passing.

NAU's Marks continued his dominance on the outside as he finished with 130 yards and a touchdown on eight catches. It was the third consecutive game that Marks eclipsed the 100-yard mark and his fourth over five games this season.

The Lumberjacks return to Big Sky action next week as they hit the road for a game at Portland State (0-5, 0-2 Big Sky) on Saturday. Kickoff is set for 2 p.m. at Providence Park in Portland, Ore.

Roehler connected on all three of his field goals vs. Illinois State - marking his first game with multiple field goals since Nov. 5, 2016 at Weber State.

Roehler's 41-yard field goal in the second quarter marked a career long – eclipsing his previous best of 40-yards vs. Montana on Oct. 22, 2016.

Senior Elijah Marks finished with 130 yards receiving – his third consecutive game with over 100 yards and fourth in five games this season.

Gonzalez's 21-yard touchdown catch in the third quarter marked the first of his collegiate career.

Illinois State's Mitchell Brees was ejected from the game following a late hit on NAU quarterback Case Cookus in the third quarter.

The victory also represented the first for the Lumberjacks against an opponent from the Missouri Valley Conference since they defeated South Dakota on Sept. 21, 2013 by a 22-16 margin.

Illinois State entered today's game having outscored its opponents 120-26 in the second and third quarters combined – Northern Arizona outscored the Redbirds 27-0 over the two middle quarters in today's 37-16 victory.

Northern Arizona improves to 3-0 in 2017 when it scores first. The Lumberjacks are 0-2 this season when allowing their opponent to score first.

The Lumberjacks 431 yards of total offense marked the fourth time in five games it has eclipsed the 400-yard milestone this season.

Illinois State entered the game with the nation's second-ranked unit in total defense (166.5 ypg) third in scoring defense (8.8 ppg) and second in passing yards allowed (113.8) – the Lumberjacks shredded the Redbirds' defense for a total of 431 yards, 37 points and 403 yards through the air.

Illinois State's defense had only allowed a total of three touchdowns over its first four games. Northern Arizona scored a total of four TDs in the 37-16 victory.

With the victory, NAU improves to 44-20 all-time in games played on Family Weekend.